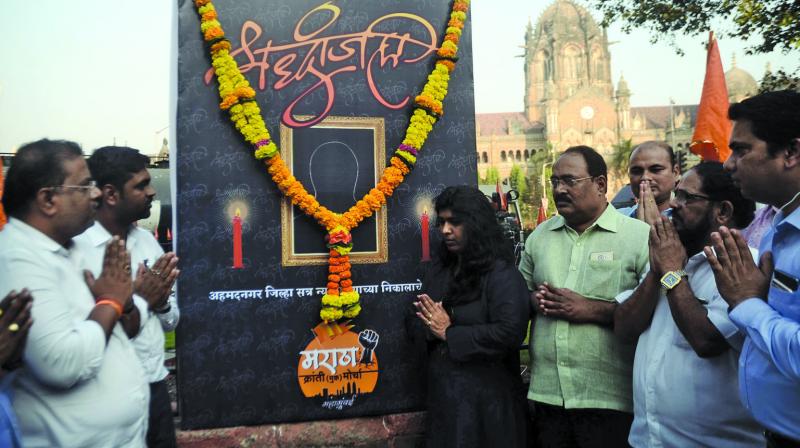 Members of Maratha Kranti Morcha pay homage to the victim near Chhatrapati Shivaji Maharaj Terminus (CSMT) on Wednesday after the verdict.(Photo: Shripad Naik)

Mumbai: The Kopardi rape victim’s parents, who were present in the court, thanked the government, police, judiciary and the Maratha community for bringing justice to their daughter after the death sentence was awarded to the convicts. Speaking about the verdict, the grandfather of the victim said, “They tortured and killed my granddaughter in cold blood. We always believed that we would get justice and we got it.” He also lauded the Maratha community for standing in their support and holding silent protests to get justice for their daughter.

“The Maratha community stood firmly and staged an unprecedented agitation throughout Maharashtra and deserves my gratitude. Now that the three convicts have been sentenced to be death, the order should be implemented as soon as possible,” he said.The father and mother of the victim also expressed their gratitude on the verdict and said that they had full confidence in the court and knew that justice would prevail and would end in the death penalty for the trio.

Representatives of Maratha organisations said , “The court verdict is hitoric in light of the unprecedented unity of the Maratha community. The verdict will be a deterrent to all those criminals and psychopaths, who dare to look at any female,” said Shiv Prahar Sanghatana chief Sanjay Bhor of Ahmednagar.