The Marathas constitute almost 31.5 per cent of the population in the state. Politically, they are a dominant community across the state. 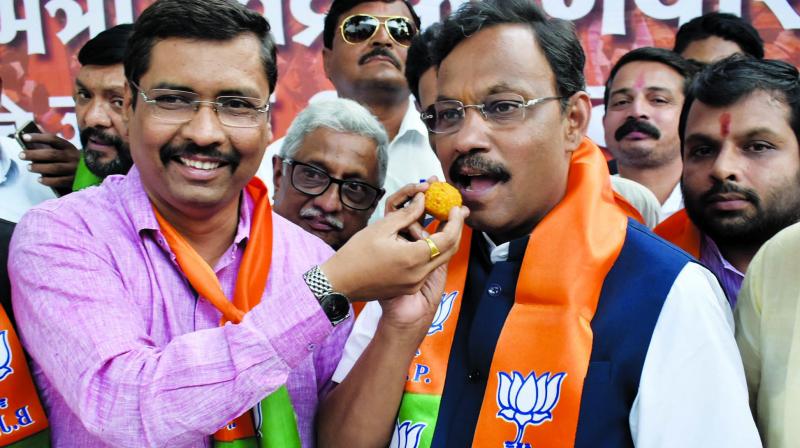 Mumbai: It will be interesting to see how reservation for Marathas, a dominant community in the state, will impact political parties electorally. All parties have now come forward to claim credit for the Marathas getting reservation, while discrediting others. The BJP held celebrations while Opposition leaders were busy explaining how they had been lobbying for Maratha reservation for decades.

The BJP is upbeat that the move to provide 16 per cent reservation to the Marathas will reap rich dividends for the party in the upcoming Lok Sabha (LS) and Vidhan Sabha polls. Claiming credit, the party held celebrations outside its headquarters after passage of the bill. The Marathas constitute 32 per cent of the state’s population.

“This reservation is a victory for the people who died during the agitation. Thousands of members of the Maratha community protested for years. After their sacrifice, the community has received this reservation,” said Mahar-ashtra Congress chief Ashok Chavan.

The Marathas constitute almost 31.5 per cent of the population in the state. Politically, they are a dominant community across the state. Till 2014, the community was a strong supporting base for the Congress and NCP in western Maharashtra and Vidarbha. The Shiv Sena made inroads into Mara-thwada during the late 1990s. In 2014 however, all equations changed and a sizeable part of the Maratha community from western Maharashtra, Vi-darbha and Marathwada went with the BJP.

“As of now, it will be tough to predict who will benefit from the bill. But it is sure that the negligible base of the BJP in the community will increase after this. Even if this bill could not stand in court. The BJP will benefit from it,” said Prakash Pawar, political analyst and professor at Shivaji Unive-rsity, Kolhapur.

The BJP held celebrations in Mumbai, Pune, Nashik, Ahmednagar, Aurangabad and other places. “The BJP has taken the risk. The anti-Maratha polarisation and especially by OBCs would be that risk. OBCs are a core part of BJP's vote base. So, BJP will have to navigate very carefully through this," said political analyst Anant Dikshit.