‘Decision made for sake of votes’

On the other hand petitioner who had moved the court seeking reservation is confident that the decision will stand in the court too. 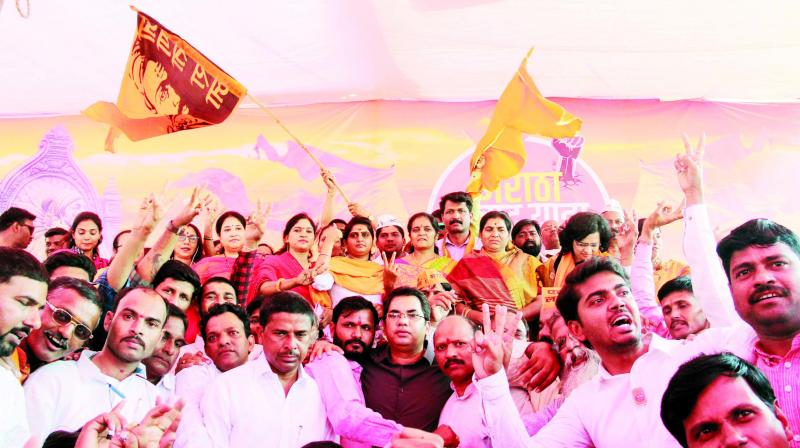 Maratha leaders celebrate the passing of the reservation bill in the Maharashtra legislature, at Azad Maidan. (Photo: Asian Age)

Mumbai: The government of Maharashtra on Thursday unanimously passed a bill proposing 16 per cent reservation for Maratha community under socially and educationally backward category, however, some of the petitioners who have already challenged the government’s earlier move to grant reservation to Maratha have indicated that they will challenge the bill in the court of law. On the other hand petitioner who had moved the court seeking reservation is confident that the decision will stand in the court too.

Advocate Sangharaj Rupwate who is appearing on behalf of activist Rajaram Kharat in the Bombay high court reacting to Maratha reservation said, that the government’s move to pass the bill granting reservation to Maratha community is fraud on the Constitution and is a step to appease voters. He also claimed that they would challenge the bill in the court.

“Dr Babasaheb Ambe-dkar in the constituent Assembly had specifically said that the reservation should not exceed 50 per cent and when there is no specific provision in the Constitution and which is interpreted by the Supreme Court therefore this decision is ill-founded. They are dabbling in all these things for the sake of votes and ahead of elections they have taken this step,” said Mr Rupwate.

Senior lawyer Satish Talekar appearing for Jamiat-e-Ulema Hind seeking implementation of Bapat Commission recommendation for grant of reservation to Muslims said, “The bill has been passed under political pressure but this Act may not stand judicial scrutiny. This would also be stayed by the high court as this is going to be challenged.” He also said, “The Supreme Court the time and again has said that only is there are exceptional circumstances than like Tamil Nadu where population of Schedule Caste and Schedule Tribe are more than 50 per cent or a state in north east where such population is more than 70 per cent in such state reservation can exceed the ceiling of 50 per cent. But otherwise reservation should not exceed 50 per cent. As far as Maratha’s are concerned I don’t think they are either socially or educationally or even economically are backward. I don’t know how these recommendations are made anything can be manipulated. Therefore Maratha as a whole does not deserve the reservation because they do not satisfy the criteria or they do not qualify the test of backwardness.”

“I don't think government has left any loopholes in the Act. All the aspects like social and economical backwardness were taken into consideration while passing bill,” said Vinod Patil, who filed the petition in the Bombay High Court seeking reservation for Maratha reservation.