It took the firemen around three hours to bring the blaze under control. 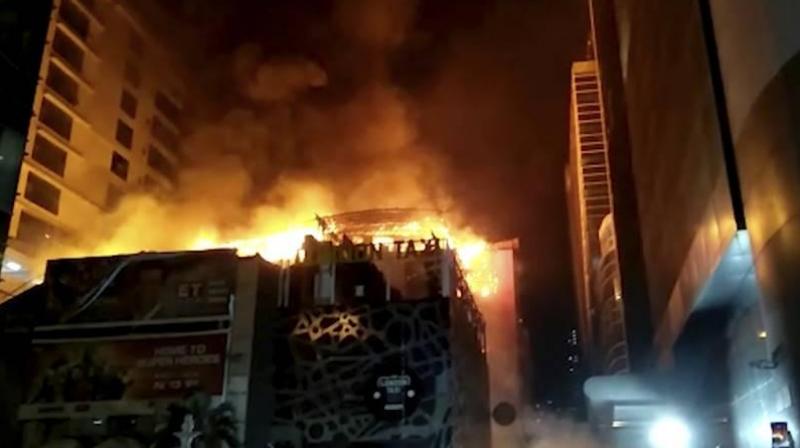 A number of people were killed and many more injured in a fire that broke out in a restaurant in Mumbai, India's financial and entertainment capital, early Friday. (Photo: AP)

Mumbai: In a horrific fire incident, 14 people, including 11 women, were killed while 13 were injured after a fire broke out in a commercial building at Kamala Mills Compound in Lower Parel on Thursday midnight. Taking a serious note of this, the Brihanmumbai Municipal Corporation (BMC) has suspended five officials of G-South ward and has also transferred assistant commissioner Prashant Sapkale with immediate effect.

According to fire officials, the fire first broke out at the roof of the restaurant, 1 Above on the fifth floor at 12.30 am and then spread rapidly to other adjoining eatery — Mojo’s Bistro. Fire vehicles reached the spot within 10 minutes.

It took the firemen around three hours to bring the blaze under control. All 14 victims died due to asphyxiation, while the injured have been admitted to various hospitals for treatment — one among them to the National Burn Centre in Airoli, for serious injuries.

As the fire erupted, there was panic among people, who were in a party mood in both the eateries. In an attempt to save themselves, a majority of the people tried to take shelter in a washroom at 1 Above, which proved fatal as they were trapped inside and died due to suffocation, said an eyewitness.

The blaze spread to the next building, which houses the offices of Times Now, Mirror Now, ET Now and Zoom TV and TV9 Marathi. The TV channels went off-air as their transmission dishes were affected. Though the fire officials said the cause of the fire was unknown, a short circuit at the restaurant is being suspected as the cause for the blaze. Fire officials said the fire fighting system of the entire building was found to be not working.

“We foundhookah accessories in 1 Above, which is illegal,” said Kailash Hivrale, deputy chief fire officer of Mumbai Fire Brigade.

Chief minister Devendra Fadnavis visited the spot and took stock of the situation. He directed the BMC to probe the mishap and submit its report within 15 days. “It is disturbing to see this incident and I have asked the BMC commissioner to conduct in-depth inquiry into the matter,” said Mr Fadnavis.

The CM also directed the civic body to carry out fire audit for similar structures in the city. “There will be immediate safety audits and if any illegalities in construction found then they will be immediately demolished,” he added.

There was uproar in the BMC standing committee meeting over the issue with the opposition accusing officials of turning a blind eye towards the illegal activities at Kamala Mills Compound. Replying to them, BMC chief Ajoy Mehta said, “Taking a serious note of the incident, we have decided to suspend Madhukar Shelar, nominate official of building and factory department of G-South ward, assistant engineer Dinesh Mahale, junior engineer Dhanraj Shinde, medical health officer Dr Satish Badgire and assistant divisional fire officer S.S. Shinde as they have been prima facie found for dereliction of duty. Assistant commissioner of G-South ward Prashant Sapkale too has been transferred with immediate effect.”

The statement released by 1 Above Management said, “1 Above has all its fire safety regulations, licences, procedures and norms in place. We have been able to help save many lives thanks to our fire safety protocols and are grateful to our staff for their presence of mind and help in this time of crisis. There are over 10 fire extinguishers and adequate fire safety signatures in the premises as is required by the authorities. We would also like to clearly state that there were NO gas cylinders kept anywhere near our rooftop premises.”

A statement from Mojo’s Bistro said, “Mojo’s has all its fire safety norms, certificates and procedures in place. The staff are thoroughly trained in fire drills, hence our staff were able to evacuate all our guests and themselves out to safety with zero injury.”