Kamala Mills fire: Brothers saved others at own expense

Heroic duo went back to fetch elderly aunt but none of them made it back unfortunately. 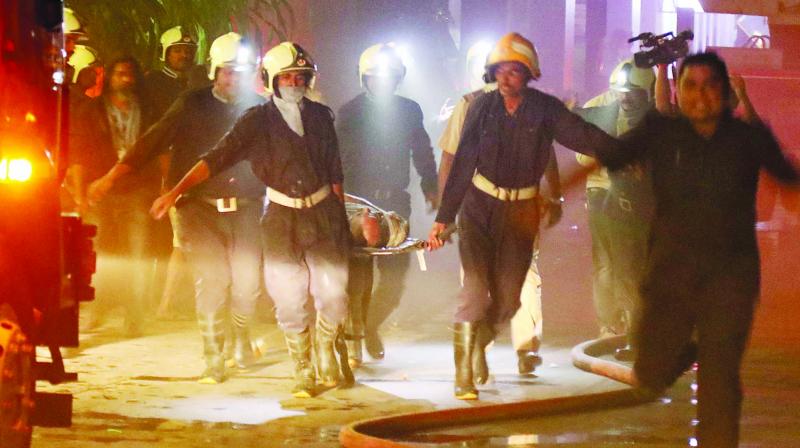 Fire fighters rush to douse the flames that engulfed three rooftop pubs inside the Kamala Mills Compound at Lower Parel early on Friday.

Mumbai: Dinner at the plush ‘1 Above’ pub proved fatal for Pramila Kenia (68) and her nephews, Dhairya Lalani (26) and Vishwa Lalani (23), who succumbed to asphyxiation after having taken refuge in its washroom after a fire broke out early on Friday at the Kamala Mills compound in Lower Parel.

The Lalani brothers helped rescue many survivors from the pub, but unfortunately could not save themselves and their aunt.

The brothers had flown down from Michigan, USA two weeks ago to attend weddings and ring in the New Year with their family. According to relatives, the brothers ran back to the washroom after realising that Kenia was trapped inside, but failed to make it back alive.

Dhairya had quit his job, and Vishwa had come to India on a holiday. The trio was sitting at a table near the exit door; and when the fire broke out, Kenia was in the washroom. A relative told this paper, “The brothers had rushed down from the staircase, but soon realised that their aunt was nowhere to be seen. The duo then went back up, and never made it back.” The brothers’ father, Jayant Lalani was extremely dispirited after this incident.

Among the 14 deceased victims of the fire was Sarbjit Parida, a senior employee at Mojo’s Bistro pub. An Odisha native, he had come to the city in search of work, according to his acquaintances. His uncle Raju Parida said the family was made aware of his death by a news broadcast on television.

“We came here to take the death body for the last rites,” he told The Asian Age.

Another victim, Yasha Thakkar (22), a student from Ahmedabad, had come to visit her cousin in the city three days ago ahead of New Year.

The girl, who was visiting the city for the first time, asphyxiated from the smoke that emanated 1 Above pub early on Friday. She had taken refuge in a washroom with two of her cousins. Her cousins survived the fire and escaped with minor injuries.