The ‘Darwaza Band’ campaign is being supported by World Bank and is being rolled out countrywide immediately after the launch. 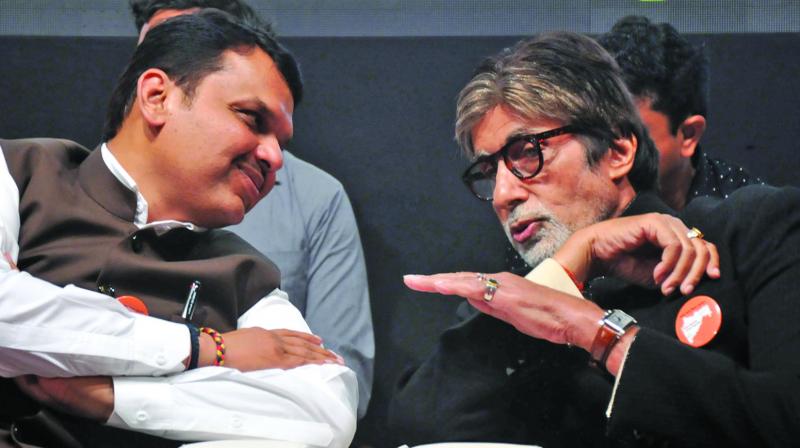 Chief minister Devendra Fadnavis and Bollywood actor Amitabh Bachchan during the launch of the campaign on Tuesday. (Photo: Debasish Dey)

Mumbai: In an effort to promote the use of toilets and curb open defecation in the country’s villages, the central government on Tuesday launched an aggressive new campaign in Mumbai titled ‘Darwaza Band’. The campaign will involve celebrities like Bollywood actors Amitabh Bachchan and Anushka Sharma.

While Mr Bachchan will feature in advertisements designed to encourage behaviour change in men who have toilets but are not using them, Ms Sharma will also be seen encouraging women to stand up for this issue in their villages and assume a leadership role.

The campaign was produced by the ministry of drinking water and sanitation (MDWS) under the Swachh Bharat Mission and personalities like megastar Amitabh Bachchan who is also ambassador for the Swachh Bharat Mission and is already associated with its ongoing campaigns, chief minister Devendra Fadnavis and Union minister for drinking water and sanitation Narendra Singh Tomar were present during the launch of the campaign.

The ‘Darwaza Band’ campaign is being supported by World Bank and is being rolled out countrywide immediately after the launch. The advertisements for the campaign have been developed by Lowe Lintas, Mumbai under a World Bank project.

Behaviour change has been the focus of Swachh Bharat Mission, which is being pursued through a countrywide comprehensive IEC (Information-Education-Communication) programme. Communication campaigns have been taken up both at the central and state levels, for promoting sustained use of toilets and for sustaining the Open Defecation Free (ODF) status achieved.

Mr Fadnavis thanked the MDWS for choosing Maharashtra to launch the campaign and emphasised that Maharashtra is committed to become ODF by March 2018.