Devendra Fadnavis met the activists before the civic body elections and had called the MMRCL managing director Ashwani Bhide. 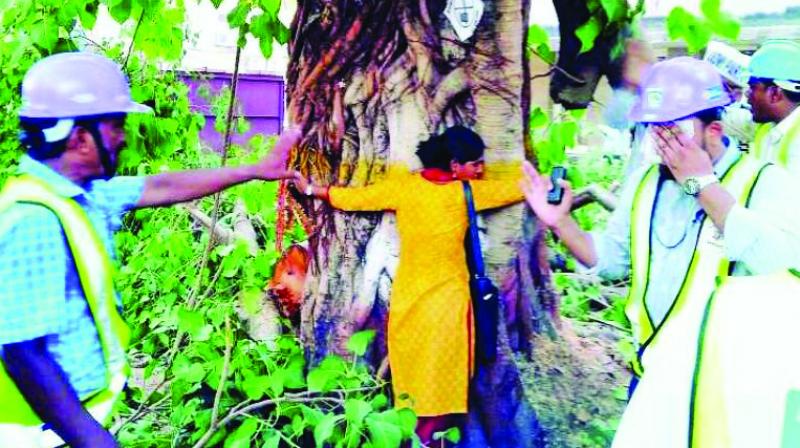 Activists claimed Metro-3 project can be built without cutting of 5,000 trees in the city.

Mumbai: The activists of the Save Trees group have alleged that hundreds of trees have been cut over the last week for the Metro-3 project without the permission of state pollution control board. The Mumbai Metro Rail Corporation Limited (MMRCL) allegedly did not approach the Maharashtra Pollution Control Board (MPCB) for clearances to cut trees for the Metro-3 project, which is mandatory to be obtained for individual stations of Metro line 3.

Though, the RTI replies for individual Metro stations are yet to be received, the reply to a RTI revealed that the MMRCL had not even sought MPCB’s permission to build metro car-shed or casting yard in Aarey Milk Colony, which is a part of the Metro-3 project. Another document acquired through the RTI revealed that the MPCB had also issued notices to the operators of the ready mix concrete plant in Aarey. The activists also raised questions over the MMRCL receiving permission from the high court to go ahead and cut trees in order to make way for the Metro-3 project.

However, MMRCL has dismissed the activists’ claims. “MMRC has all the clearance required for the project and is doing all the activities legally for timely completion of the project,” said a spokesperson from MMRC.

“Over the ten days, hundreds, if not thousands of trees, have been cut across Mumbai to make way for the Metro-3 project. The tree cutting was allowed before the project received all legal clearances. All Coastal Regulation Zone (CRZ) and Pollution Control Board permissions have still not been granted to the Metro,” said one of the activists of Save Trees group, Zoru Bathena.

Chief minister Devendra Fadnavis met the activists before the civic body elections and had called the MMRCL managing director Ashwani Bhide. The chief minister had asked MMRCL to consider Kalina as an option to build car-shed instead of Aarey. However, the MMRCL claimed dismissed the option and claimed that it would start work in Aarey from June. The activists alleged that despite noting the instances of gross negligence in the procedure carried out for granting approval, the MMRCL was given permission to cut trees. The activists claimed that 20 feet wide trees were being shown as two feet wide.