Mr Gawde added, “Police are on duty at many places and we are assessing how many have been injured. 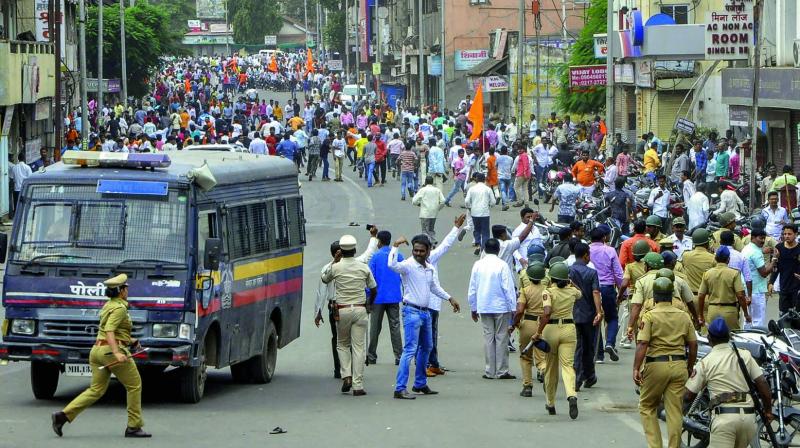 Police personnel clash with the Maratha Kranti Morcha protesters during their district bandh called for reservations in jobs and education in Solapur, Maharashtra. (Photo: PTI)

Mumbai & Pune: Another Maratha protester from Aurangabad has committed suicide by throwing himself under a running train over the demand for reservation on Monday, in what is the fifth suicide by protesters across the state within a week as part of the ongoing agitation for reservation for the community. Meanwhile, the agitation continued in parts of Marathwada as well as western Maharashtra.

Agitators of the Maratha Kranti Morcha (MKM) turned violent in Pune by torching 8-10 vehicles and vandalising over 30 vehicles in Chakan. They also vandalised many vehicles in Pimpri. Also, large areas of Osmanabad, Solapur, Kolhapur, Nandurbar and Aurangabad witnessed sporadic incidents of arson, violence, road blocks and noisy processions on foot and on motorcyles. In Chakan, protesters torched 40 buses and damaged around 50 more on the Pune-Nashik highway, forcing commuters to take shelter in office buildings in the vicinity. Police had to lob teargas shells and fire in the air to control the mob. At least eight policemen were injured in the violence. Pramod Jaising Hore (35) had committed suicide in Aurangabad by jumping in front of a moving train. Mr Hore had posted on Facebook and WhatsApp, said senior inspector Natha Jadhav of Mukundwadi police station.

Mr Hore was preparing for his Maharashtra Public Service Commission (MPSC) exams. He wrote on Facebook: “Today one Maratha is leaving...but do something for reservation.” This is the fifth such death of protesters. Kakasaheb Shinde (28) jumped into the Godavari  River in Aurangabad in the first incident.  Many of Hore's friends had requested him not to take the extreme step but he did not pay heed. His body was found on the railway tracks this morning, the official said. The police officers injured in Pune, included Tejaswi Satpute, additional SP, Chakan area of Pune (rural), Ram Pathare, deputy SP, Khed area, G. S. Madgulkar, deputy SP (Dehu Road), Dhanyakumar Godse, police inspector and Arjun Pawar, police sub-inspector.

Meanwhile, the agitation continued on Monday. There was a complete shutdown in Solapur and protesters held agitations in various cities of Marathwada and Western Maharashtra. Also, an agitation turned violent in Chakan, an industrial town having establishments of global business tycoons, in Pune. Agitators pelted stones at state transport buses and private four and two-wheeler vehicles. They vandalised over 100 vehicles and they also torched more than 30 vehicles. They attacked the Chakan police station, injuring eight police personnel. Police had to lathicharge and burst tear gas shells to control the mob. By 4 pm, police imposed CrPC 144 banning assembly of more than four people.

Dayanand Gawde, police inspector, crime branch, Pune Rural Police, said, “We have imposed CrPC 144 at Chakan at around 4pm as the crowd became angry and started attacking vehicles and pelting stones at people. Over 8,000 agitators gathered in the town and they spread to various points. Another group agitated at Khed Naka, another towards Pune Road and so on. We have asked police from other police stations in Pune Rural and also Satara Police for help.”

Mr Gawde added, “Police are on duty at many places and we are assessing how many have been injured."