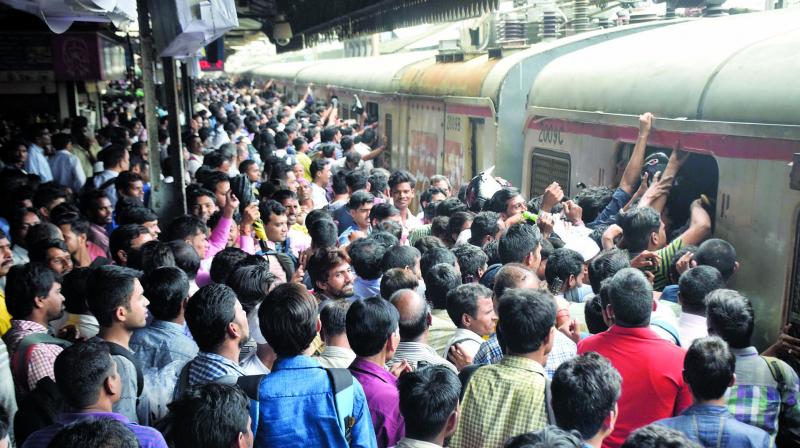 Huge crowds were witnessed at the Thane station after train services resumed at 6:30 am on. (Photo: Deepak Kurkunde)

Mumbai: Thousands of commuters struggled to reach home from Thane station on Wednesday morning after they got stranded outside their homes due to Tuesday’s heavy downpour that disrupted railroad commute.

The Thane-Kalyan suburban railway services resumed on Tuesday night itself but commuters stranded in Mumbai, especially in Dadar, South Mumbai and other areas on the night intervening Tuesday and Wednesday struggled to return to Thane.

On Wednesday morning, thousands of commuters took Eastern Freeway to reach Thane. But commuters had to face difficulties, as frequency from Thane to Dombivali was very poor.

The rains had halted the suburban train services on Tuesday. But late in the night, Western Railway managed to run local, though in slow pace, from Churchgate. The Central Railway had its own problem as the Mithi river water was not going back between Sion and Kurla stations, the services was stopped entirely.

But, the Central Railway administration had cleared the track from Thane to Kalyan on Tuesday night. When the news of services resuming towards downside from Thane came, thousands of commuters tried to reach Thane. The police had stopped Eastern Expressway too as water logging in King’s Circle area was high.

So, on early Wednesday morning, sub-urban commuters took to private vehicles to reach Thane via Eastern freeway. But their difficulties didn’t stop there.

The Thane station was already crowded as huge numbers of commuters were waiting for the locals on the bridge as well as platform numbers 2 and 5. Though Central Railway had started Thane Kalyan service, the frequency was poor.

Almost every train that started after 6.30 in the morning till 12 in the noon had a huge crowd. “For the first time, I am seeing such a crowded train for down locals in the morning,” said Uday Nevalkar, who wanted to reach his office in Kalyan.