The overflowing river waters damaged numerous vehicles even as local shopkeepers suffered losses to the tune of several lakhs of rupees. 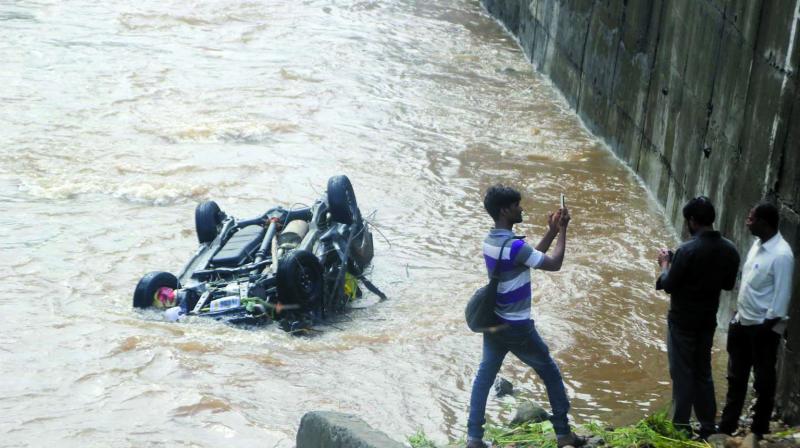 Areas such as Shantivan and Shrikrishna Nagar in Borivali east were submerged in water up to eight feet deep.

Mumbai: Hundreds of homes and shops located near the Dahisar river which flows along Sanjay Gandhi National Park (SGNP) went under water after the river level rose above normal thanks to Tuesday’s downpour. Areas such as Shantivan and Shrikrishna Nagar in Borivali east were submerged in water up to eight feet deep.

The overflowing river waters damaged numerous vehicles even as local shopkeepers suffered losses to the tune of several lakhs of rupees.

The waters receded only on Wednesday, leaving behind heaps of muck around residential buildings such as Koyana, Shantidwar and Godavari. The deluge affected local bungalows as well, and five ATMs belonging to different banks as well as the furniture of banks such as HDFC and Oriental got damaged. What’s more, the rising waters threatened to sink the Lord Ganesh idol of Shrikrishna Nagar Sarvajanik Ganeshotsav, forcing the organisers to conduct a premature visarjan (immersion).

One of the organisers, Sunil Dahale, told said, “Usually, we celebrate the Ganesh festival for 11 days but Tuesday’s flooding has spoiled everything. There was water in our mandap and the level kept rising. Hence, we had to immerse the Ganesh idol in the river.”

Amit Bagwe, who owns the Grand Maratha Hotel, said, “I am facing a loss of Rs 17 lakh due to Tuesday’s deluge. All the furniture in my hotel has been destroyed. My Innova car worth Rs 23 lakh was washed away by water.