The eastern suburb of Vikhroli saw three deaths due to wall collapse incidents on Tuesday. 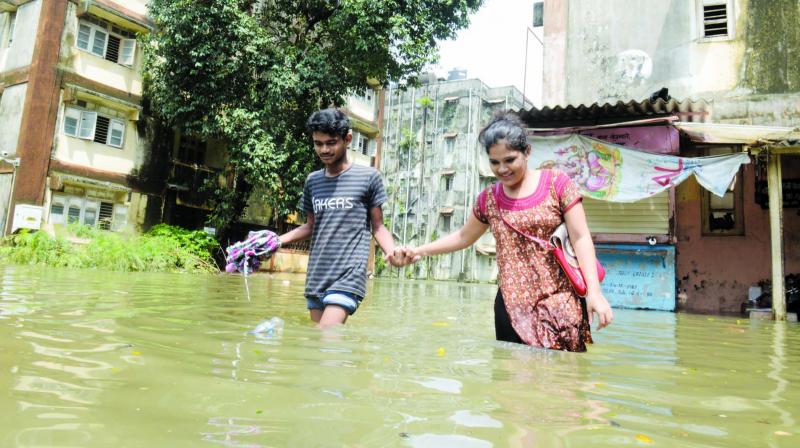 Mumbai: Life in Mumbai limped back to normalcy on Wednesday as the rains finally relented. However, with railway and road traffic services still not normalised for a majority of the day, it took a long time for people who were stranded overnight at their places of work or outside in shelters, to reach home.

According to Brihanmumbai Municipal Corporation (BMC) and police figures, seven deaths have been reported from the city and Thane from Tuesday’s downpour while seven have been reported missing. According to PTI reports however, a total number of 10 people have died in rain-related incidents from Mumbai, Thane and Palghar. Prominent among the missing is city gastroenterologist, Dr Deepak Amrapurkar, who is suspected to have been washed away in an open manhole at Lower Parel.

The eastern suburb of Vikhroli saw three deaths due to wall collapse incidents on Tuesday. Of them, two-year old Kalyani Jangam was declared dead after being admitted to Mahatma Phule Hospital. In Surya Nagar, Nikhil Satyendra (1.5 years) and Suresh Mourya (40), died as a part of the house collapsed on them. At Vikhorli Parksite, three people were injured after a safety wall collapsed on them at Jankalyan Nagar Society.

In Asalfa, Ghatkopar, four people were injured due to a house wall collapse. They were admitted to the Rajawadi Hospital, where Rameshwar Tiwari (45) was declared dead by the doctors.

BMC chief Ajoy Mehta said, “Mumbai went through extreme weather conditions as it received 325 mm in 12 hours, which led to unprecedented flooding. At least 425 people were rescued by the Fire Brigade from 12 locations in trains. Due to strong winds and heavy rains, we had 247 reported incidents of tree collapse.”

The weather department had also predicted heavy showers for Wednesday but the rains took a breather, providing respite to Mumbaikars who were stranded at several places on Tuesday. However, their journey back home was full of obstacles as Central Railway services remained affected, causing great inconvenience to commuters.

All schools and colleges had been declared closed and even a majority of the offices remained shut. Many parts of the city still remained under water in the morning, resulting in traffic jams. “After being stranded in office overnight, I took the local train in the morning. But it still took me five hours to reach Dombivali from CSMT,” said Tejas Bhatia. Western and Central Railways cancelled 17 trains and two express trains respectively. There was commotion at Dadar, as passengers of the Dadar-Sawantwadi Tutari Express gheraoed railway officials because of the delay in departure.

As several parts of the city were flooded, the BMC has issued a health advisory. “There is a possibility of water getting contaminated due to flooding. Hence people are advised to drink water only after boiling. If faced with problems like fever, vomiting and headache, they should also take treatment in civic hospitals,” said Mr Mehta.