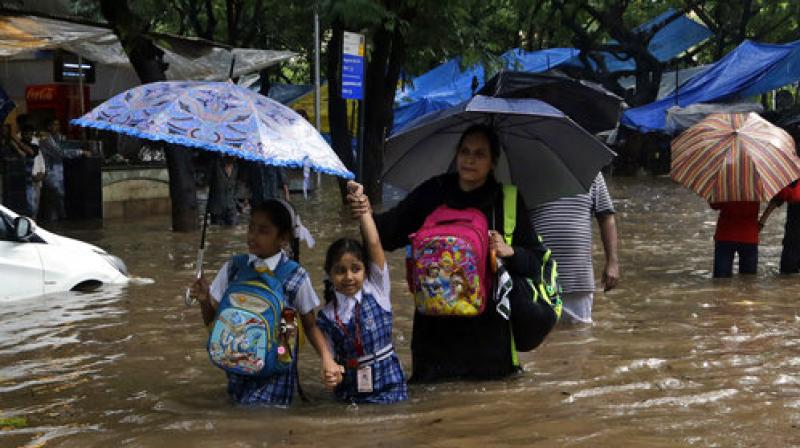 Mumbai: Days after heavy rains virtually clogged Mumbai, angry citizens and activists have vented their ire at the Municipal Corporation of Greater Mumbai (MCGM) for "shoddy" civic work that they believe was responsible for submergence of rail tracks and streets.

The torrential rain plunged the megalopolis into chaos as water swamped homes, and submerged roads and railway tracks, leaving thousands of people stranded at various
places.

Many citizens who battled water-logging and waded through waist-deep water to reach their destinations due to torrential downpours, said that the country's richest civic body has failed them.

Among other issues, desilting of nullahs is most talked about though the MCGM claims it had cleaned them ahead of the monsoon and spent crores for the purpose. The MCGM has been ruled by the Shiv Sena for over two decades.

"The need of the day is fixing the accountability. The BMC (alternate name for MCGM) and its rulers have not learnt any lesson from similar such events in the past. They are
trying to pass the buck on someone. Disciplinary action should be taken against those responsible for water-logging and other civic woes," housing activist Vinod Sampat said.

Former journalist and Padma Shri awardee Sucheta Dalal said it was high time for the government to do away with the haphazard development and to work for an ecologically balanced city.

"Attempts are being made to encroach upon green spaces like Aarey Colony, Borivali National Park etc. Yet, much-needed trans-harbour link, which has been hanging fire for the last 65 years, is moving slower than underground Metro. Do we know how many trees have become weaker due to underground digging for metro?" she asked.

Dalal, the Trustee of Moneylife Foundation, said builders who talk about the corporate social responsibility (CSR) have never cared for cramped infrastructure in the city.

Journalist-turned-activist S. Balakrishnan said the problem was "deep rooted" and the BMC has failed to get its act together even after the intervention of the high court.

"Since the last several months, the Bombay High Court, which has stayed all fresh constructions, is waiting for a report from the BMC on its action plan for tackling the huge problem of garbage in the city. Even the HC is unable to move the BMC into action," he said.

Balakrishnan said the BMC had not formulated its response yet. He said the BJP, a junior partner of the Sena in the BMC, too is responsible for the civic woes as the city
municipal commissioner was handpicked by Chief Minister Devendra Fadnavis.

IIT-ian Shirish Sukhtame, a former president of the Practicing Engineers Architects and Town Planers Association (PEATA), said each nullah has become an "underground dumping station". He alleged that corruption in desilting work was the root cause of the problems like water-logging and flooding of the rail tracks.

"I fail to understand why desilting of drains has to be an annual affair? Why can't they be cleaned and desilted by the BMC regularly? Their cleaning happens only once a year, and that too before the monsoon. Nobody knows how much silt is removed and where is it dumped. Desilting has become only an eyewash, thanks to the deep rooted corruption prevailing in the system," he alleged.

Addressing reporters on Wednesday, Sena chief Uddhav Thackeray said it was incorrect to say that nullahs were not cleaned properly.

"On Tuesday, everyone, including the mayor, MLAs, BMC employees, Shiv Sainiks, helped the people immensely. However, we can fight nature only to a certain extent," he said.

MCGM Commissioner Ajoy Mehta had said there were fewer incidents of water-logging, compared to the previous year.

"The Mithi river's lengthening and deepening was done appropriately and hence, there was no flooding this time," he said.

The civic chief said over 30,000 employees were pressed into service to handle the situation and that the MCGM had operated a total of 229 pumps to flush out water on
Tuesday.

NCP leader Dhananjay Munde had demanded a probe by a retired high court judge into the "thousands of crores" spent on desilting the nullahs of the city.

On Tuesday, renowned gastroenterologist of Bombay Hospital Dr Deepak Amrapurkar (58) went missing from near the Elphinstone Road station. An eyewitnesses had claimed that the doctor fell into in a manhole in a flooded street.

Similarly, citizens are livid at the civic body for not doing enough to pump out the water that submerged rail tracks and streets.