BJP president Ashish Shelar asked him to 'shun arrogance and apologise' for the chaos caused by rains on Tuesday. 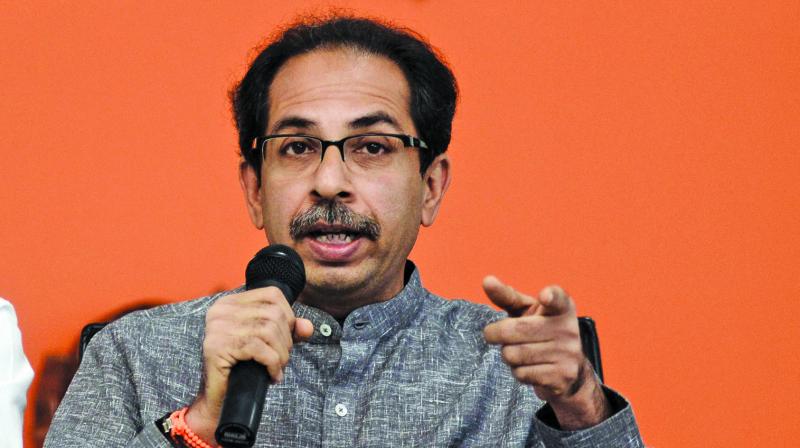 Thackeray was asked to explain the causes behind the city getting water-logged every year and people dying in monsoon, despite the Shiv Sena being at the helm of the MCGM for the last 25 years. (Photo: File)

Mumbai: Shiv Sena president Uddhav Thackeray on Wednesday flew off the handle when questions were posed to him on the monsoon preparedness of the party-ruled Municipal Corporation of Greater Mumbai or MCGM, a day after heavy rains virtually clogged the city.

Faced with a barrage of questions at a press conference in Mumbai, an irked Thackeray told the reporters "stop the rains yourself". Latching onto Thackeray's comments, city BJP president Ashish Shelar asked him to "shun arrogance and apologise" for the chaos caused by rains on Tuesday.

Earlier, fielding the query of a reporter, the Sena chief said, "You stop the rains then...Tell me what should I do? Do not think that you have the sole monopoly over Mumbai. We do serve the people, which are why they vote us back to power."

Thackeray was asked to explain the causes behind the city getting water-logged every year and people dying in monsoon, despite the Shiv Sena being at the helm of the MCGM for the last 25 years.

The reporter sought Thackeray's reaction, asking him about the MCGM's claims that it spends crores to ensure that the city does not get flooded, that desilting works are completed on time and pothole-ridden roads are fixed.

In response, Thackeray said, "Shiv Sainiks are much more in touch with the common people than you (media) are. Our workers went to homes of people (to help them), but you did not."

Responding to Thackeray's outburst, Shelar said, "Instead of speaking in an arrogant tone, you should humbly apologise to stranded people and rectify your mistakes."

Referring to the Sena chief's statement that the administration can fight nature only to a certain extent, Shelar questioned if it was limitations of those in power rather than limitation against nature that led to the flooding.

"Will you (Thackeray) answer where did Dr Amrapurkar go missing?" he questioned.

According to eyewitnessses, he fell into a manhole, the police said.

The BJP leader also questioned what would happen to the families of those, whose homes got inundated with water on Tuesday.

"Where were those in power hiding (when Mumbai was flooded)? The BJP MLAs, corporators were out on streets helping people as part of their duty," he said.

The Shiv Sena is under fire after Mumbaikars suffered a double whammy of the inundated roads and disruption of the rail along with vehicular traffic yesterday.

Thackeray and MCGM Commissioner Ajoy Mehta had said that the civic body had done a commendable job in the given circumstances.