A full bench said the government, authorities and citizens should learn from the earlier experience 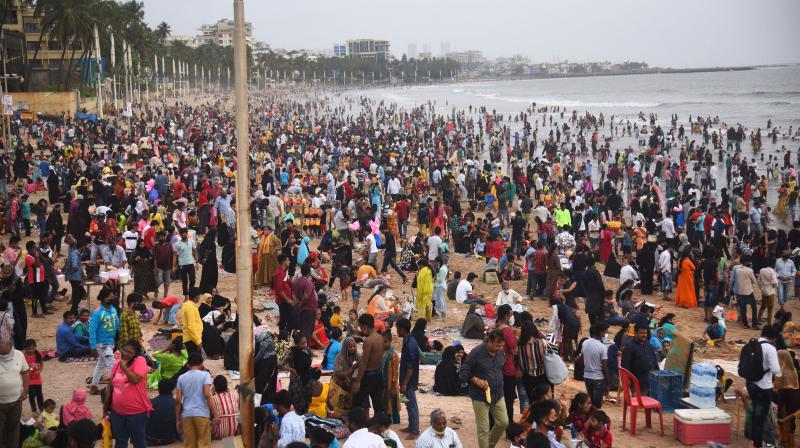 People gather in large number at the Juhu beach after authorities allowed opening of beaches for public, in Mumbai. (Photo: PTI)

Mumbai: The Bombay High Court on Tuesday raised concern over crowds assembling at public places in Mumbai and said if it was not controlled or restricted, the city would face a similar situation as earlier this year when the number of COVID-19 cases surged, leading to the second wave of the pandemic.

A full bench of Chief Justice Dipankar Datta, Justices A A Sayed, K K Tated and P B Varale said the government, authorities and citizens should learn from the earlier experience and noted that as per experts, the third wave of the COVID-19 pandemic was knocking at our doors.

In our meeting of the administrative committee of the HC, lawyers and other experts held on Monday, an expert, Dr Rahul Pandit, who heads the Special Task Force appointed by the Supreme Court, informed that the third wave of the pandemic is knocking at our doors, Chief Justice Datta said.

Unless all the safety protocols are not followed, the state will face an imminent danger. Dr Pandit was also of the view that at least till April 2022, the nation may not get rid of COVID-19, he said.

If you (government) do not control or restrict this, then again the same situation is bound to happen. We need to draw from our experience, the court said.

The bench extended all interim orders passed by the high court as well as all subordinate courts and tribunals in Maharashtra and Goa till September 30.

"Considering the view placed by the experts, the situation of uncertainty and the ensuing festivities which could pose a threat to the human kind, we are of the opinion that the interest of justice would be served if the protective interim orders are extended till September 30, the court said.

The HC also said that its full bench would assemble next on September 24 to review the situation.

On Monday, Mumbai reported 334 new COVID-19 cases, the sixth day in a row when the addition to the tally was above 300, taking the infection count to 7,43,832, while the death toll increased by two to reach 15,976, a civic official earlier said.