The minor dumped the body on railway tracks in a bid to cover it up as an accidental death on the night of October 9. 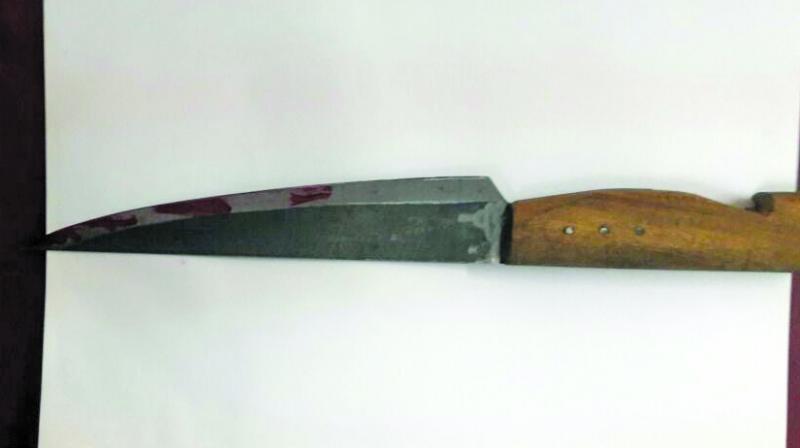 The knife that was used to kill Shaikh.

Mumbai: A 17-year-old boy allegedly hacked a 19-year-old to death in Govandi over a dispute related to pending dues worth Rs 300. The minor dumped the body on railway tracks in a bid to cover it up as an accidental death on the night of October 9. The deceased and the minor worked in a butcher shop in Govandi, and the dispute erupted after the accused took mutton worth Rs 300 from the shop to sell it in an open market, putting the deceased in a tight spot.

Officials of the Government Railway Police’s (GRP) crime branch said that the body of Imran Shaikh was found near the tracks between Chembur and Govandi stations. The officials said the body was found cut into two from the abdomen. However, there were also several other body injuries, which seemed to have been inflicted before the “accident.”

A team of Special Task Force (STF) of the GRP started a parallel investigation into the case and made the breakthrough that Shaikh was murdered and the body was dumped on the tracks later. The officials fanned out in the neighbourhood and learnt that a 17-year-old had murdered Shaikh. However, the police has withheld his name citing his age.

Shaikh had told the accused that he should pay the money. The accused was told to sell the mutton at whatever rate he wanted and to retain the profit.

“As Shaikh demanded the amount on several occasions, the accused called Shaikh to meet near the railway tracks, and he reached there with one of the butcher’s knives. He stabbed Shaikh twice and then dumped the body on the tracks,” said Samadhan Pawar, deputy commissioner of police, GRP.

Following sustained questioning, the accused broke down and revealed the reason for killing Shaikh. The GRP arrested him on charges of murder as per the provisions of the Indian Penal Code. The officials will, however, send him to children’s home as he is underage and the Juvenile Justice Board will hear the case, officials said.