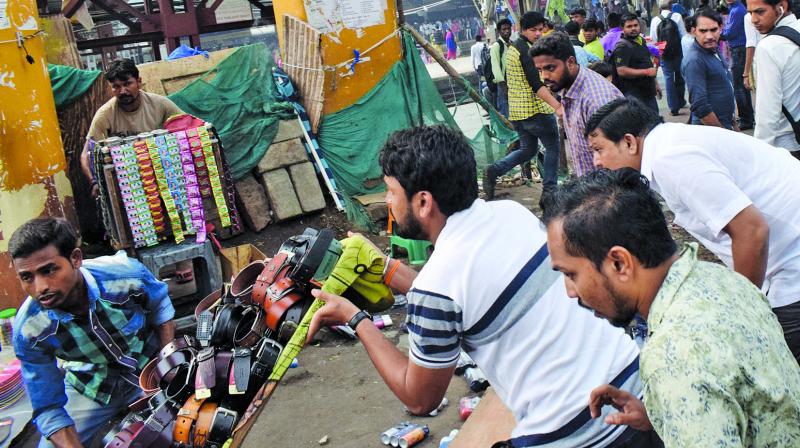 The MNS workers had beaten hawkers outside Thane railway station on Sunday.

Mumbai: In the backdrop of a volatile situation related to recent incidents of confrontation between Maharashtra Navnirman Sena (MNS) activists and hawkers around suburban railway stations in the city, Mumbai Congress has decided to hold the agitation in Dadar on Tuesday.

Mumbai Congress chief Sanjay Nirupam along with the hawkers in the city will hold a silent march in Dadar to protest against MNS action. In reply, the MNS workers protested in front of Mr Nirupam’s house and tried to set a stall there.

The political battle between the MNS and the  Mumbai Congress is becoming aggressive day by day. After the police registered a complaint against Mr Nirupam for instigative speech in Malad West on Saturday, The Congress leader has decided to take the battle in MNS’s bastion, ie. Dadar. On Tuesday, he is planning a hawkers’ rally against MNS. “This will be a silent march. The attempt to take the law into their hands and indirect government protection to MNS is exposed now. We will fight this battle for poor hawkers,” said Mr Nirupam.

The MNS also continued its aggressive stand on Monday. In reply to Mr Nirupam, MNS workers held a protest at Nirupam’s house in western suburban. They also tried to set the stall in front of Mr Nirupam's house but the police didn't allow it.

“Mr Nirupam is playing with the life of lakhs of Mumbaikars. There is a strong law against illegal hawkers. We are just demanding its implementation. Opposition for the sake of politics is not good for the city,” said MNS leader Sandeep Deshpande.

Meanwhile,  on Saturday, a group of hawkers had allegedly attacked MNS leader Sushant Malavade in Malad.

The MNS leaders have alleged the involvement of Congress leaders in this attack but the Congress has denied this.