The fireball led to a massive blaze that engulfed several shanties. 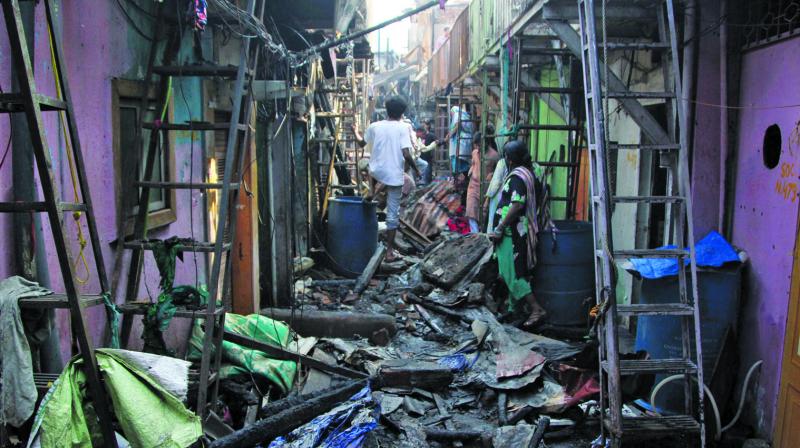 The police suspects the fire was started in a bid to stall the ongoing civic demolitions of unauthorised shanties.

Mumbai: The Bandra police has taken several persons under its scanner in its probe related to Thursday’s fire at Garibnagar slums that gutted shanties on October 26. The police suspects those under its scanner had played a role in triggering the fire in a bid to stall the ongoing civic demolitions of unauthorised shanties.

The suspicion comes in the backdrop of the arrest on Sunday of Shabbir Khan, a small-time businessman, whose hut was also demolished during the drive of the municipal corporation. The police had been looking for the accused persons following the sudden fire, as it had taken precautions like removing combustible material from the area before beginning the demolition drive. Khan, the police said, first set the fire and in order to trigger its rage, also pushed an LPG cylinder into it. The fireball led to a massive blaze that engulfed several shanties.

“Following Khan’s arrest, he revealed that the fire was triggered to stop the demolition drive. Some other persons whose identities are known assisted him in the act and we are searching for them,” said an officer from Nirmal Nagar police station.

Khan is suspected to have set the shanties near the railway’s ticket counter on fire first so that it would also affect the movement of the local trains. The fire led to losses of several belongings and machinery in several small production units located in the slum colony.

While many of the residents alleged they were not allowed to vacate their homes, the police said that they have stated they could have succeeded in recovering the valuables without a fire.

A case has been registered against Khan and unknown persons under sections 120 (B) (criminal conspiracy) and 336 (endangering life and personal safety of others) of the Indian Penal Code.