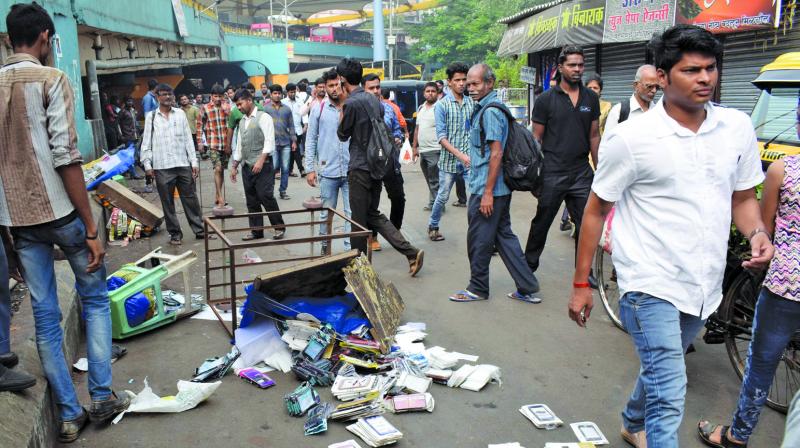 he statements of five hawkers have been recorded and the police is taking action against the MNS workers on the basis of these statements.

Mumbai: The Vashi police has arrested five Maharashtra Navnirman Sena (MNS) for having allegedly beaten the hawkers and vandalising their stalls near the Vashi Railway Station on Sunday. After MNS chief Raj Thackeray addressed a rally in south Mumbai earlier this month over the death of 23 people in the Elphinstone Road foot overbridge stampede on September 29, the MNS workers have taken upon themselves the task of removing hawkers from station premises in the city.

According to the Vashi police officials, on Sunday evening around fifteen to twenty MNS workers had broken the stalls of illegal hawkers near the Vashi Railway Station area, including the Raghuleela Mall and Inorbit Mall. They had also beaten up some hawkers who were not ready to close their stalls and trashed their wares. The MNS workers who were arrested on Monday include Shrikant Mane, Sandesh Dongre, Sanprit Tumrekar, Swapnil Gadge and Sagar Naikare. They were later released on bail.

On Saturday, the Malad police had arrested 18 MNS workers for assaulting hawkers. The Thane Nagar police had arrested MNS city president Avinash Jadhav and four others for evicting the hawkers from near the Thane station last Saturday. The statements of five hawkers have been recorded and the police is taking action against the MNS workers on the basis of these statements.

The Thane City police has registered two separate cases against the MNS party workers in connection with the act of vandalism against the hawkers that took place on Saturday morning. The one registered by The Thane Nagar police is for not taking permission before conducting a protest under the Bombay Police Act and the one registered by Naupada police station is for rioting and causing hurt.