The Bulbbul star talks about playing the titular role, which is garnering rave reviews 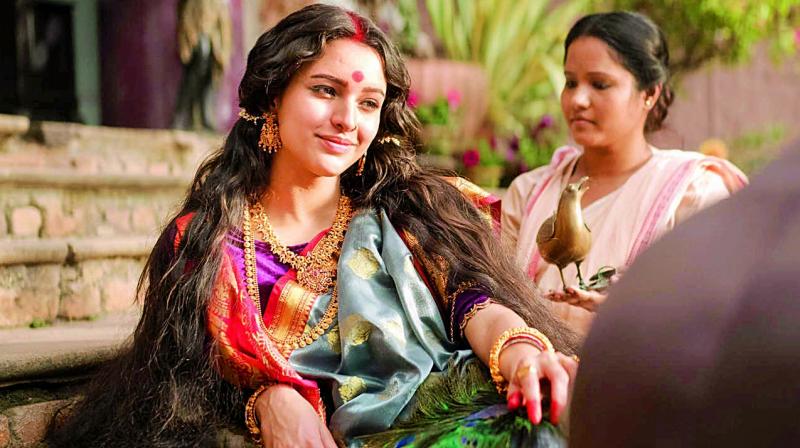 The 26-year-old actor who plays the eponymous role in the fantasy, which draws from folklore, says she feels grateful that people are appreciating the film.

“I knew the audience would love the story but I didn’t expect this kind of response. My social media handles are flooded with messages,” says Dimri about the Netflix film bankrolled by Anushka Sharma’s Clean Slate Films.

Set in Bengal of the late nineteenth century, Bulbbul is a story of a young, innocent bride whose life changes with a sequence of events that subverts her seemingly pre-ordained fate.

Tripti takes on the task of essaying her layered character with much conviction and shines through. “When I auditioned for the part, I did not know that it was going to be such an interesting role and that my character will have such a graph,” says the actress who prepped for two months with her director Anvita Dutt for her part.

Learning on the job

Tripti tells us that Anvita had done the research and explored the character in detail. And while they only tried to draw on the similarities Tripti had with Bulbbul,  accomplishing this had its challenges.

“I could relate to the naive and young Bulbbul, before the character transforms. It was easier to understand her mind set and how she looked at things. But it was difficult to internalise her transformation. It was like playing two different personalities,” adds Tripti.

Luckily, a ten-day workshop with acting coach Atul Mongia helped her slip into the mind space of the mysterious khol-eyed Thakurain who gave away as much as she concealed. “He asked me to focus on my breathing pattern. I was struggling to inhabit the headspace of the other Bulbbul who is very calm and quiet because she’s complete in herself,” says the actress who was advised to “cut off from the world” in this pursuit.

The workshop helped Tripti get into the skin of the character, which is evident particularly in a scene, which serves as the turning point of the film.

“I think the most difficult scenes were when she is physically violated by her brother-in-law and when she’s abused by her husband. From day one, I knew how important those scenes are for the film. I was very nervous and wanted to approach the scene as Bulbbul and not Tripti. Luckily, I had Rahul [Bose] and Anvita around to help,” she says.

Following her heart into performing

While growing up in Delhi’s Air India Colony, Tripti was always sure that she wasn’t cut out for a regular job. “I wasn’t interested in studies and wanted to do something different,” she says. However, her initiation into the world of showbiz happened by chance when her brother’s friend sent her pictures to an agency.

“I started working with them though my parents wanted me to focus on my studies and complete my graduation,” she recalls. But it was her next stint in a YouTube channel that honed her skills. “I used to get very nervous and couldn’t even pronounce my name in front of my camera. But eventually, I became better,” she adds. Modelling offers and assignments followed, and she landed her first Bollywood film while shooting for a Santoor soap ad.

Dimri debuted with the comedy-drama Poster Boys in 2017, but the film barely received any attention, let alone appreciation. But it made her self-confident. “My first scene was with Sunny and Bobby Deol. There were a hundred people on the sets and three cameras trained at me. I was nervous as I am very shy and find it difficult to talk to strangers,” she recollects.

Tripti’s next release, Laila Majnu, also slipped through the cracks, even though it received critical acclaim from some quarters. The 26-year-old accidentally bagged the role despite being rejected earlier.

“My flatmate was auditioning for Laila Majnu and asked me to accompany her to the venue. A casting team member saw me and asked me to audition again,” she says of the film where she teamed up with her Bulbbul co-star Avinash Tiwary for the first time.

After that film’s release, however, Tripti did many acting workshops to hone her craft. “I was very insecure about not knowing anything about acting. I did get a couple of offers but nothing interesting came my way. It was challenging to refuse offers,” says the actress, revealing how she was advised by well-wishers to not take up Bulbbul.

“People were skeptical as it was an OTT film and asked me to wait for a feature film. They even advised me to take up TV commercials with known faces,” she adds.

Having proved her detractors wrong, the actress is now basking in the success though she is yet to sign another project. “I waited a year after Laila Majnu for Bulbbul and now, it’s only been a week. For now, I am waiting for the lockdown to be lifted completely. I love to travel and have a special connection with the mountains. During childhood, I spent every summer vacation, visiting relatives in Chamoli district in Uttarkhand. I still love spending time there,” she concludes.