Two of the Indian Americans received USD 50,000 each as scholarship money and another three got USD 25,000 each. 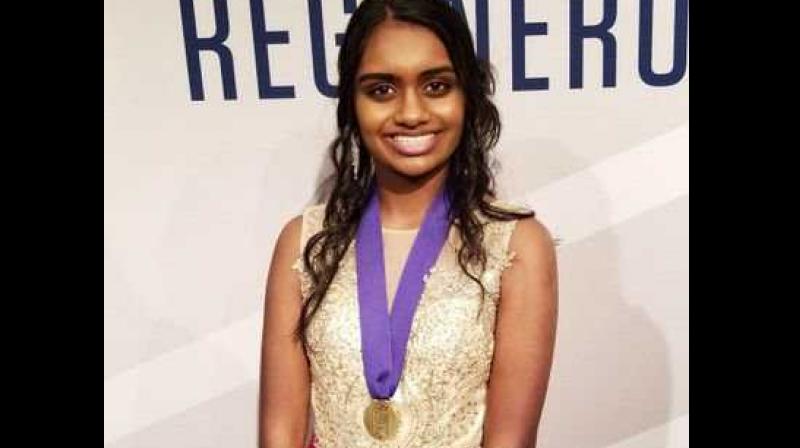 Kavya Kopparapu (in pic), 18, from Virginia and Rahul Subramaniam, 17, from Connecticut were recipients of USD 50,000 each as 2018 Davidson Fellows laureates. (Photo: Twitter | @KavyaKopparapu)

Washington: Reflecting the domination of the community in science and technology, half a dozen Indian American teenagers have been bestowed with the prestigious 2018 Davidson Fellows scholarships. Two of the Indian Americans received USD 50,000 each as scholarship money and another three got USD 25,000 each.

In all 20 meritorious students from across the country were presented with the 2018 Davidson Fellows Scholarships in Washington on Friday. Named as the among "The 10 Biggest Scholarships in the World" and one of the "7 Prestigious Undergrad Scholarships", the fellowship is offered by the Davidson Institute to students who are 18 years or younger and who demonstrate the development of their talents with a significant piece of work in science, mathematics, technology, engineering, music, literature, philosophy or outside the box.

Kavya Kopparapu, 18, from Virginia and Rahul Subramaniam, 17, from Connecticut were recipients of USD 50,000 each as 2018 Davidson Fellows laureates. Kopparapu was recognised for her innovative personalised, targeted treatment for patients with cancer, and Subramaniam for developing an early warning system for Zika virus in mosquito populations.

Three of the Indian Americans – Sachin Konan from Arizona, Marissa Sumathipala from Virginia and Eeshan Tripathi from New Jersey bagged the 2018 Davidson Fellows award of USD 25,000 scholarship each. Tripathi, 16, received the award for utilising artificial intelligence and machine learning to find a solution for poor indoor air quality (IAQ). His research on IAQ has the potential to prevent diseases, save millions of lives and billions of dollars from lost productivity.

Konan's project addresses the recovery of buried earthquake victims after natural disasters. He was inspired to build a system capable of detecting humans through rubble after watching the devastating news feeds of families and first-response teams searching for buried victims in the 2015 Nepal earthquake.

Marissa, 18, won the award for her novel heart disease therapeutic that treats all of the disease's components simultaneously by attacking crucial cellular processes that are the root cause of heart disease.

Rajiv Movva, 18, from California is a recipient of the USD 10,000 scholarship for building a computer model that can use a particular DNA sequence as input to predict gene expression level as output, which sheds much light on the poorly understood "dark genome" that doesn't directly code for proteins.

All Davidson Fellows also received a letter from the US president wherein he encouraged the winners to "apply their knowledge and talents to serve our communities".