Afghanistan bans children under 14 from working and has ratified international conventions against child labor. 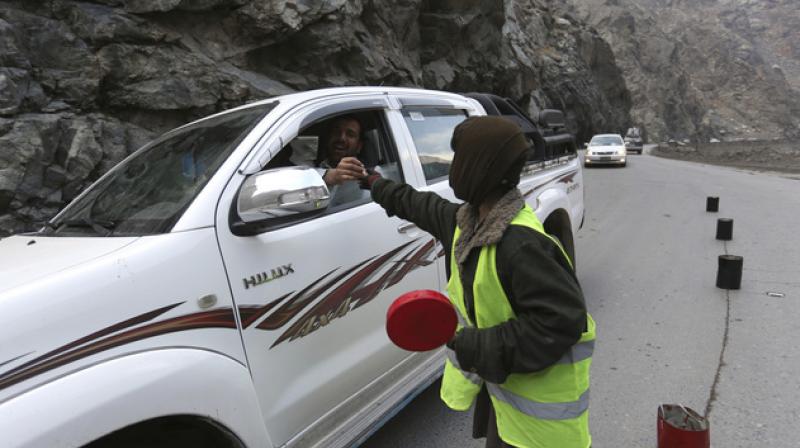 11-year-old Sedaqat receives a tip from a motorist on the Maipur Pass, along the main highway from Kabul to Pakistan, near Kabul, Afghanistan. (Photo: AP)

Kabul, Afghanistan: On a mountain pass outside Afghanistan's capital, trucks barreling down the highway slow down when 11-year-old Sedaqat waves his homemade sign to warn of a hairpin turn.

He spends the entire day out in the bitter cold, working as a volunteer traffic warden on a treacherous bend in the road and accepting tips from grateful drivers. On a good day he'll make the equivalent of $4, which he'll use to support his family.

Sedaqat, who like many Afghans has only one name, is one of several children who make money as volunteer traffic wardens on the Maipur Pass, along the main highway from the capital, Kabul, to Pakistan.

The highway cutting through the jagged peaks is clogged with overloaded trucks, busses and cars, in a country where reckless driving and poor road maintenance contribute to an untold number of deadly accidents.

Sedaqat says his main worry is the exhaust fumes, which make his eyes hurt at night. He would prefer to go to school, but as the eldest son, it fell to him to support the family when his father, a brickmaker, developed chronic stomach pains.

"I warn my son every day about the cars coming from the Kabul side. The drivers are completely careless and I fear for my son's life," said his father, Nader Khan. "It pains me to see him work, and I'd rather see him go to school. But what he earns now is the only income we have in the family."

On a recent winter morning, as other children headed off to school, Sedaqat set up black, red and blue oil cans at his favorite bend at the highway and took up his red wooden traffic sign.

"When I see other kids going school, I feel sad because I also want to go to school," Sedaqat said. "But I know that I'm the only breadwinner in my family. I have to work to help myself and my family survive."

He said he would like to become a real traffic policeman, a job that pays around $180 a month. But that would require some schooling.

"I have to do this now to support my family," he said. "Maybe one day I'll become a real traffic policeman and help my nation."