Scientists win Nobel Prize in Physics for decisive contributions in the observation of gravitational waves. 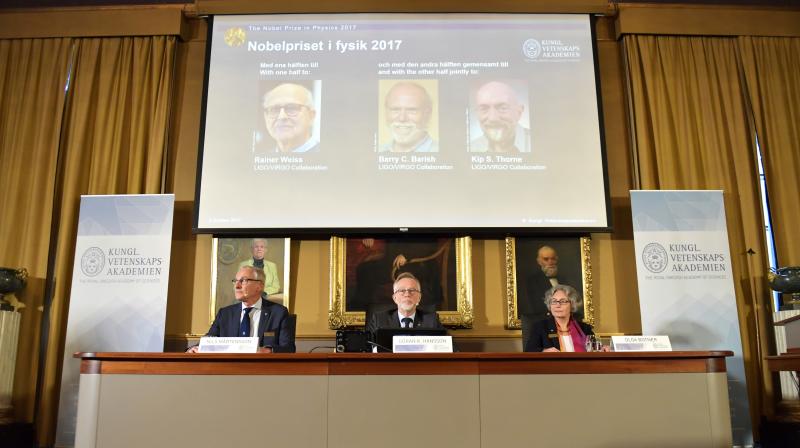 Stockholm: Scientists Rainer Weiss, Barry Barish and Kip Thorne won the 2017 Nobel Prize for Physics for decisive contributions in the observation of gravitational waves, the award-giving body said on Tuesday.

“This is something completely new and different, opening up unseen worlds,” the Royal Swedish Academy of Sciences said in a statement on awarding the 9 million Swedish crown ($1.1 million)prize.

“A wealth of discoveries awaits those who succeed in capturing the waves and interpreting their message.”

Physics is the second of this year’s crop of Nobel Prizes and comes after Americans Jeffrey Hall, Michael Rosbash and Michael Young were awarded the Nobel Prize for Physiology or Medicine on Monday.

All three scientists played a leading role in the Laser Interferometer Gravitational-Wave Observatory, or Ligo, experiment, which made the first historic observation of gravitational waves in September 2015.

Predicted by Albert Einstein a century ago as part of his theory of general relativity but only first detected in 2015, gravitational waves are 'ripples' in the fabric of space-time caused by violent processes in the Universe, such as colliding black holes or the collapse of stellar cores.