The young sprinter is all set to leave his slum and embark for the hallowed one at the famed Racers Track Club in Kingston. 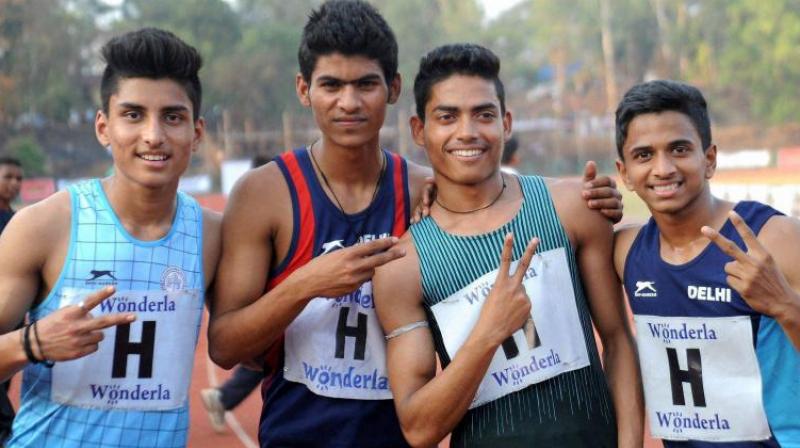 Nisar Ahmed (second from right) has been named in the 14-member contingent of budding young athletes who are selected to train for a training camp in Jamaica. (Photo: PTI)

New Delhi: Luck only favours those who are brave enough to defy all odds, and this 15-year-old rickshaw puller's son has raced his way into Usain Bolt's club - an achievement what most teens may just dream about.

Nisar Ahmed, who lives in a 10×10 feet tin shack near the railway tracks in the Bada Bagh slums of Delhi's Azadpur area, is looking to forge one such heart-warming story.

The young sprinter is all set to leave his slum and embark for the hallowed one at the famed Racers Track Club in Kingston, Jamaica, home of eight-time Olympic gold medalist sprinter Usain Bolt.

Nisar has been named in the 14-member contingent of budding young athletes who are selected to train for a training camp in Jamaica.

Excited about the opportunity to train in Bolt's club, Nisar told ANI, "I am very excited to travel to Jamaica for training. I will learn there and one day will win a medal for the county. My father is a rickshaw puller and he manages to earn just 5000 per month, most of which is spent on my needs".

"I want to meet Sports Minister so that I can ask him for support. I am sure if I will get the support I will do well.I am also training for Commonwealth Games trials and hope I will qualify", he added.

Nisar's childhood coach Surendar Singh, on the other hand, said that the young boy is extremely talented and that getting an opportunity to train in Jamaica will truly serve beneficial for him.

"Nisar has amazing talent. I have seen him grooming day by day and the way he started his career is truly an example. Getting an opportunity to go to Jamaica is the biggest thing for him. I hope, he will do well", Surendar said.

Nisar started his athletics career at school, and slowly and steadily he went on to win many national and school championships.

Recently, he rewrote the Under-16 national record in the 100 metres after clocking a timing of 10.85 seconds at the 33rd National Junior Athletics Championships in November.

Meanwhile, Nisar breakout performance came at the Delhi State Athletics meet in September where the sprinter clocked 11 seconds on the final day to bag the 100m gold.