The princess said that she will marry Kei Komuro, who was a classmate of hers at Tokyo’s International Christian University. 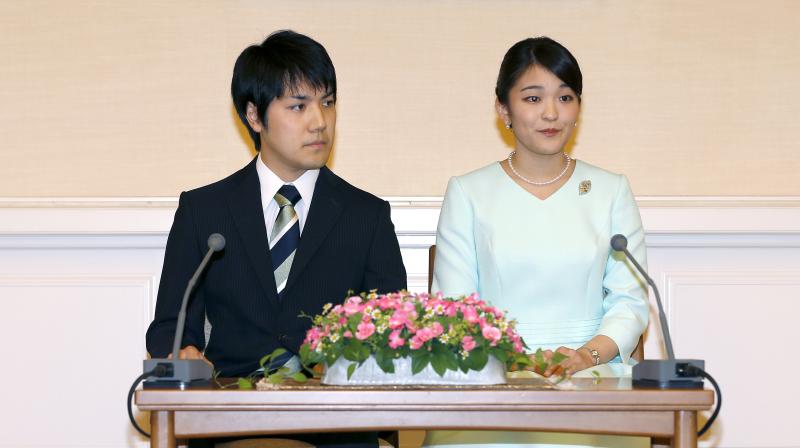 Japanese Emperor Akihito's oldest grandchild, Princess Mako, says she is getting married to her university classmate who won her heart with bright smiles and sincerity. (Photo: AP)

Japanese Emperor Akihito’s oldest grandchild, Princess Mako, 25 is giving up her royal status to marry a commoner she fell in love with.

The princess said that she will marry Kei Komuro, who was a classmate of hers at Tokyo’s International Christian University.

According to Japanese royal laws, women are not allowed succeed to Japan’s throne which means that Princess Mako will lose her royal status once she weds the 25-year-old Komuro, a legal assistant who loves playing the jazz piano.

Speaking at a press conference Princess Mako said that what attracted her to Komuro was “his bright smiles like the sun.”

According to her they first talked for the first time at an event for students ahead of a study programme in Tokyo.

That was five years ago.

Over time the princess learnt that he is a ‘sincere, strong-minded, hard worker.’

Komuro added that he was thankful and happy to have been accepted by her parents, Prince Akishino  and Princess Kiko, and her grandparents, Emperor Akihito and Empress Michiko.

Details of their wedding have not been decided, and palace officials say the ceremony is expected sometime around autumn next year.

However, the happy news also bears with it the foreboding that it could spell disaster for the future of a royal family facing concerns about a declining population to keep their 2,600-year-old bloodline going.