Newsmakers   04 Nov 2017  Bringing back the Dire wolf, in a tamer avatar
Newsmakers

Bringing back the Dire wolf, in a tamer avatar

The Dire Wolf Project was started after witnessing decline of purebred dog health, over breeding and horrible breeding practices. 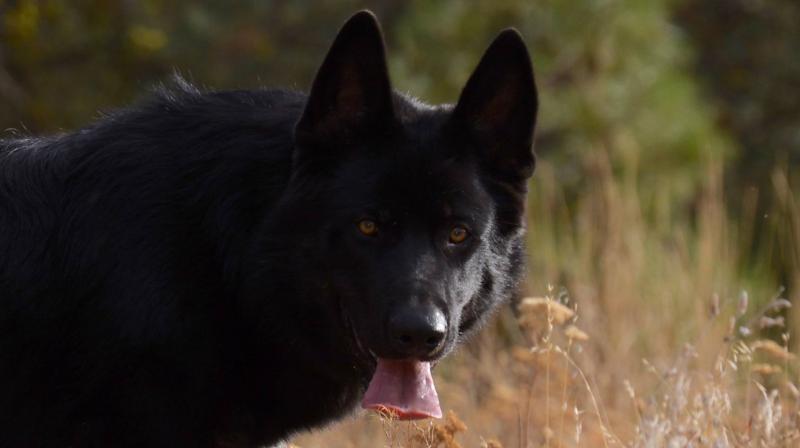 The Canis Dirus is believed to be the largest canine to have ever walked the earth. (Photo: The Dire Wolf Project/ Facebook)

Needless to say, the hugely popular series Game of Thrones garnered a lot of interest in a set of large extinct species of wolves, known as the dire wolf. Representatives of House Stark, they became an integral part of the storyline in both books and the series.

While the makers have been slowly phasing out dire wolves from the televised series (they are still very much a part of the narrative in the books), it turns out that dire wolves are closer to a real-life resurrection.

Southern Oregon is the home to one such breeder, Lois Schwarz, who for the last 30-years has spent trying recreate a new sort of dog, she calls the American Alsatian that grow up to be tall, broad, amber eyed and quite wolf-like in their appearance.

The Dire Wolf Project by Schwarz predates the series by a good three decades.

Speaking to this correspondent, Shawna Davies – Representative of the Dire Wolf Project says that Canis Dirus is believed to be the largest canine to have ever walked the earth.

“Averaging 30 inches at the shoulder and suspected to have weighed approximately 150 lbs. They lived during the Pleistocene era, 125,000 to 10,000 years ago.”

Asked about the project itself, Davies explains, “The Project was launched in 1987 by Schwarz.”

Davies adds that witnessing the decline of purebred dog health, over breeding and horrible breeding practices increasing in the US, Schwarz realised that the issues were leading to pet over- population and rescue/shelter crowding.

“She developed the Project as a way to begin to resolve these issues; putting forth a broad long range project that, hopefully, people who produce other breeds will adopt and follow.”

According to Davies, the underlying goal of the project is every procedure, by-law or practice, is set up to protect each and every little puppy-life they produce.

“And it starts with the bone structure.”

Davies says that the breed, Direwolf Dog is not so much the breed’s name, but a description of the product which is the American Alsatian. What Schwarz wanted was a modern-day dire wolf -- a sort of kinder, gentler, cuddlier version of the dire wolf.

Davies further adds that Schwarz wanted to put health and temperament before the looks of her new breed. According to her Schwarz found that the solid, balanced bones of the dire wolf would more than likely stand up to many more years of wear and tear than any breed she could see at the time and theorised that the particular structure would be less likely to develop a degenerative congenital condition.

Once that was decided Schwarz, says Davies wanted a ‘companion’ temperament and over the past 30 years she has chosen particular dogs from breeds such as Irish Wolfhound, Alaskan Malamute, Great Pyrenees, Anatolian Shepherd to obtain the bone structure, while choosing the pups with temperaments opposite to what they were bred for.

“Consistent selection for low prey drive, little desire to roam away from home, and a calm demeanour for 30 years has produced what we call a ‘companion’ temperament,” adds Davies.

Davies says that one other thing that the Project aims at achieving is to resolve the very human desire to connect with their natural surroundings.

She says that’s some people satiate this desire by keeping wild or hybrid-wild animals as pets but most find it difficult if not impossible to house and care for them, because they still have many of the characteristics of a wild animal.

“Many wolf-hybrids intended as pets, wind up relinquished to rescues or sanctuaries. It is incredibly difficult to find an appropriate home for them.  The Dire Wolf Project strives to deliver the “look” of the wild animal, but provide in this animal an easy-to-keep personality that won’t be a financial or ethical hardship on its people.”

While at a cursory glance, some might mistake it for a GSD, Davies says that there are basic morphological differences.

“The main differences (for me here in the US) between the American Alsatian and the German Shepherd Dog are temperament – American Alsatians are much easier to keep, less hyper, less drive, much calmer by nature than a GSD. Physically, they are larger, more solid, heavier coated, larger/wider head, smaller ears and tail, and thicker bones.”

According to Davies, the Dire Wolf Project has been able to successfully recreate the bone structure in the generations being born this year. It is also the year that Schwarz has finally expanded to grant internships to other breeders who wish to follow her standards of breeding.

However, since the extinct dire wolf left behind no DNA, there is no way to know the exact colouring or ear/tail set of the breed.

“Each breeder will have their own ideal of colouring and markings. Schwarz kennels is moving toward the “reverse black” seen in some Grey Wolves, while others would use a brindle or lighter sable. The colour is inconsequential for us as long as it does not interfere with the overall health of the dog.”

While they are not recognized by any formal kennel clubs other than their own and they do not allow any other clubs or organizations to adopt their breed as a recognizable by their standards, Davies says that they will continue to strive to recreate the exact bone structure of the now-extinct dire wolf, using only domestic dogs.

“As more and more people join our process, we hope to achieve a wider gene pool and less need for outcrossing. Because we do not sacrifice any of the great health and outstanding temperament of our lines, the look of the dog will always be secondary to the genetic excellence of the progeny of our dogs.”

Asked why she loves the breed so much, Davies concludes, “Over the past 20 plus years of my grooming career, I have been witness to some of the most irresponsibly bred dogs imaginable. I was extremely impressed with American Alsatians purpose of breeding, and the ethics of its policies. The dogs themselves are very attractive to me, but I was enthralled with the possibility of a healthy dog with a companion temperament. And I too, like many other humans, desire to bring ‘nature’ into my home. I would have loved to own a wolf, but knew my lifestyle would not permit it. The American Alsatian is my perfect solution.”