Japan has been at the sharp end of recent provocations from Pyongyang, which fired two missiles over its northern islands. 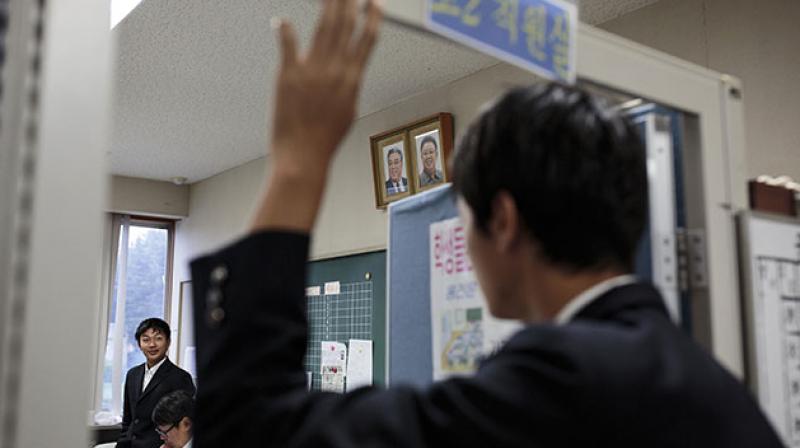 There are around 500,000 ethnic Koreans in Japan - mostly descendants of civilians taken from their homes during Japan's brutal colonisation of the Korean peninsula from 1910 until Tokyo's defeat in World War II in 1945. (Photo: AFP)

Tokyo:  Portraits of North Korea's late leaders hang proudly in the classrooms of the Korean High School in Tokyo, where the recent surge in tensions over Pyongyang's nuclear weapons programme have seen faculty and staff subjected to death threats.

It is one of 60 so-called "pro-Pyongyang" schools in Japan catering to an ethnic Korean community that - over decades - developed and maintained a link to North Korea despite never living there.

There are around 500,000 ethnic Koreans in Japan - mostly descendants of civilians taken from their homes during Japan's brutal colonisation of the Korean peninsula from 1910 until Tokyo's defeat in World War II in 1945.

The division of the peninsula into North and South and the devastating 1950-53 Korean War that followed also divided the community, and schools like Korean High emerged with backing from pro-North organisations and funding from Pyongyang.

"Every time news (about North Korea) breaks, we get anonymous calls threatening to bomb the school or kill students at a nearby station," Shin says.

"Female students have had to stop wearing the ethnic school uniform on their commute," he adds sadly.

Japan has been at the sharp end of recent provocations from Pyongyang, which fired two missiles over its northern islands in quick succession, prompting terrified residents to rush for shelters.

And with the belligerent regime in Pyongyang threatening to "sink" Japan into the sea, the sense of tension and anxiety has left many ethnic Koreans feeling conflicted -- especially the younger generation for whom modern Japan is the only home they have known.

One Korea High student, 17-year-old Hwang Song-Wi, says he watches the news with "mixed feelings", and that he both "trusts and doubts" reports from both sides in the crisis.

Ri Chun-Hui, a Tokyo-based lawyer, said the anger directed at his community as a result of Pyongyang's provocations are nothing new - noting a similar backlash that followed the abduction of a number of ordinary Japanese citizens by North Korean agents in the late 1970s and early 80s.

"Koreans were once thought of as victims of Japan's colonisation but we are now treated as if we were all perpetrators of the abductions," said Ri.

"The sentiment that you can attack anything linked to North Korea now prevails in Japan," he added.

The kidnapped citizens were taken to the North in order to train spies in Japanese language and culture.

Then-leader Kim Jong-Il later allowed five of them and their families to return to Japan, but many believe Kim did not come clean about other abductees, including Megumi Yokota who vanished when she was 13.

Trump, who mentioned Yokota in his recent UN General Assembly speech, is scheduled to meet abductee families during his trip.

For Korean parents in Japan who want their children to learn the Korean language and history, a "pro-Pyongyang" school is virtually the only option - no matter their own political persuasion.

"Because they are not Japanese, I want my children to go to a Korean school ... and learn the language and the ethnic spirit. Those are the most important things," said Hwang's mother, Oh Jong-E, adding that shared ancestry trumped the division of the Korean peninsula.

"I basically believe there is no North or South. We are one ethnic people," said Oh, herself a former pupil of the school.

According to one official from the General Association of Korean Residents in Japan, Pyongyang has channelled 48 billion yen ($423 million) to schools in Japan since 1957, although it was unclear what, if any, funds the cash-strapped North provides today.

Some teachers at the school voice sympathies with North Korea, but ideological teaching in the curriculum has thinned out over the years and a relatively neutral version of Korean language and history is now taught - albeit overseen by the portraits of Kim Il-Sung and Kim Jong-Il.

Oh's 17-year-old son plays in goal in the school football team and dreams of playing in Japan's professional league.

One day he wants to play international football -- not in the colours of Japan but of North Korea.

"I hope someday I will be able to play for the country," Hwang said.