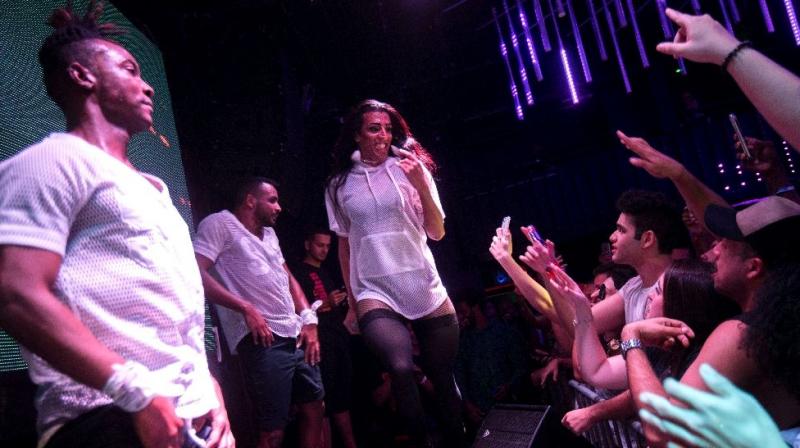 MC Pepita, despite her more than 100,000 Facebook followers, says there are still many difficult days. (Photo: AFP)

Rio de Janeiro: Brazil is becoming an increasingly dangerous place for transgender people but four popular singers are among those who think they can change the tune.

According to the rights group Transgender Europe, Brazil topped a list of 33 countries for trans killings between October 2015 and September 2016, accounting for 123 out of a worldwide count of 295. The good news, though, is that once-hidden crimes are being reported more frequently. And that's partly due to the work of activists like these four singers -- all born male and identifying as female.

These are their stories.

Camila Monforte was born in Rio de Janeiro's notoriously tough Complexo do Alemao favela. As an adolescent she spent two years living rough in a Rio train station, working as a prostitute, after being thrown out of the family house. She now lives in Sao Paulo with her 21-year-old adopted son and is a Brazilian funk performer going by the name of MC Trans.

"I've known who I am, as a transsexual and artist, since I was a child. Funk opened doors for me and allows me to support my son and my mother," she said backstage at the first LGBT dance in Rocinha, another Rio favela. "Music has let me heal my wounds, bring my family back together and rebuild my life."

It has also brought Monforte's message of tolerance to a wide audience. She has 600,000 Facebook followers and on YouTube her videos have got some five million views. With breast and buttock implants, she clearly revels in her transformation, but has not gone as far as a sex change. "I love how I am," she said.

"I've made it to 30 years old and that's hard for a Brazilian trans," she said. According to government statistics for 2013, trans people in Brazil died on average at 35, compared to the overall average of 75. "I consider myself victorious not just because of the music but because I survived in a country full of prejudice," Monforte said.

Linn da Quebrada, 27, was born in Sao Paulo and performs a mixture of rap and Brazilian funk, representing what she calls "people pushed to the margins". For her, the break from her birth sex came when she was 17, having been brought up in the strict environment of the Jehova's Witness faith. "I decided no longer to follow the expectations of being a man or a woman, but to follow my own expectations," she said, dressed in hot pants and boots after a show in Rio. Since then she has become an outspoken activist, dubbed by some the "gender terrorist" for her combative style.

"My body was brutalized by having to follow the norms and sometimes you have to answer back with the same violence. To be a gender terrorist is to accept risks," she said. Her lyrics reflect the attitude: "Weak bodied, badly abused, this queer is a Molotov (cocktail), the street car for the rejected. I was expelled from the church, because a rotten apple contaminates the others." She says surviving as a trans in Brazil means being on the attack. "We're not wanted in schools, in shops or at work, so now we are occupying these spaces."

Raquel Virginia, 28, also from Sao Paulo, and Assucena, 29, from the north-east of Brazil, recorded an album together called "Bixa," adding an "x" into the usual spelling of the word for "queer" to reference the symbol for neutral gender. They met seven years ago while at university and decided to make music. "We're putting a new spin on Brazilian pop music, giving it the perspective of two transgender women," Assucena said.

Transitioning has been difficult for both, they say, but the hardest part "has been to face society, which is extremely transphobic," said Virginia, who has long nails and hair. "During my transition, it was clear that most people thought I was a prostitute."

Priscila Nogueira was born Angelo 28 years ago in the north of Rio de Janeiro. Fans, who call her Mulher Pepita, or "Pepita Woman," now know her for her strong transgender rights stand and Brazilian funk songs with strongly sexual lyrics. "I'm no diva, but I'm a militant," Nogueira said at a club in central Rio. "I think people are starting to break through the barriers of prejudice."

But Nogueira, who has more than 100,000 Facebook followers, says there are still many difficult days. "When my first video came out, people said I looked like a mutant, which offended me," she said. She has taken hormones without medical supervision, a risky treatment. But she says her struggles will all pay off. "Even if it's the last thing I do, I'll win respect," she said.