Narthaki Nataraj became the first person from the trans community to receive a Padma Shri, the third highest civilian award in the country. 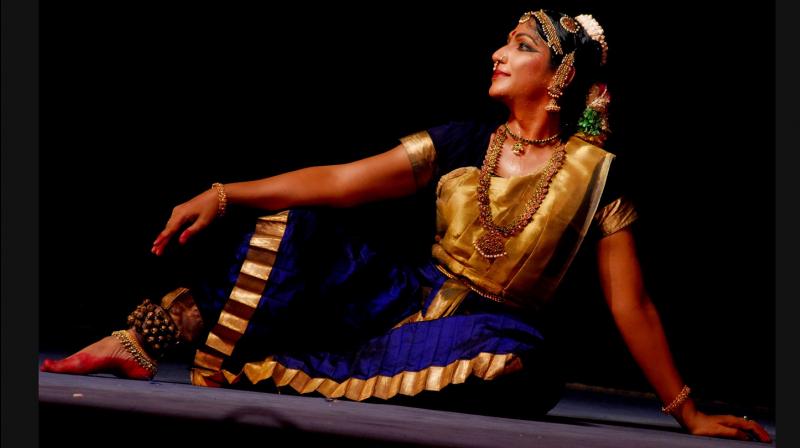 Being a Bharatanatyam dancer, Narthaki specializes in the Thanjavar-based Nayaka Bhava tradition and has become a known face associated with this dance form in India and abroad. (Photo: narthakinataraj.com)

Mumbai: On Republic Day 2019, Narthaki Nataraj became the first person from the trans community to receive a Padma Shri, the third highest civilian award in the country.

Being a Bharatanatyam dancer, Narthaki specializes in the Thanjavar-based Nayaka Bhava tradition and has become a known face associated with this dance form in India and abroad.

She has performed at all leading festivals in India, USA, UK and Europe.  She was bestowed with a honorary doctorate by Periyar Maniammai University.

In conversation with this correspondent, Narthaki Nataraj talks about her childhood experiences, journey as a dancer to winning the Padma Shri award.

Correspondent: How did you begin your journey as dancer? Difficulties you faced as a dancer?

Narthaki Nataraj: As far back as I can remember I was always interested in dance, wanted to dance to an appreciative audience and excel in my art. I used to get opportunities to do 3 to 5 minute dances for functions and small events. I did not know formal dance as such, my imagination helped shape my movements.

So, unknown to my family, I used to give performances and wipe all traces of makeup for fear of punishment before coming home, but they always managed to find out. An elderly relative, who visited my house frequently and recognized my talent, could not bear to see me treated harshly and took responsibility to get me a good teacher.

But she was stage drama actress. I requested her that I wanted to learn dance and not acting.  She took me to Namanur Jeyaraman to teach me, but we had to travel from Madurai to Sivaganga to meet him. We had only limited funds. So, Shakti's ambitions took second place and she sacrificed everything for me from then on. Later on, we joined our Guru K.P. Kittappa Pillai. Initially my family were not supportive about this as they had no answer to give to the then conservative society but now we have understood each other.

Correspondent: What did you feel when you got to know that you were being awarded Padma Shri?

Narthaki Nataraj: I was half way through my show at the Nishagandhi dance festival when the host speaker came up on stage and announced that the Government of India has enlisted my name for Padmashri award.

I was so surprised, elated and happy. Words could not express my happiness only dance can. So I danced the rest of the show with even more enthusiasm.

But all this is because of the blessings of my Guru Shri. K.P.Kittappa Pillai. If not for him we would not be here today. I would also like to thank all my well wishers for their support till date.

Correspondent: What message do you want to give the society and trans community?

Narthaki Nataraj: I got this award not because I am a Transgender but because I am an artist. It is for my merit and talent and not for my physical differentiation.

Gender, caste religion whatever it may be is only for the material being. You being male or female or a third gender is nature. You can't change it. You don't have to.

It is your inner soul that you have to identify and determine. Only that matters.

Correspondent: What all difficulties you faced in your childhood?

Narthaki Nataraj: Both me and Shakthi were born into a well off family. We were "born with a silver spoon" but not meant to own it easily.

We have come up the hard way, faced lot of humiliations and fear in our younger days. From the time I knew what life was, the only things I experienced were taunts and rebukes.

I was about 7 unable to express myself the way I do now with courage and conviction. I could not understand why I was different from the other boys.

I could not express my thoughts and remained silent. I used to dress up and dance in front of the mirror when no one is seeing. But there was always this search within me as to "Who am I and why am I like this?"

Our grit and determination in getting the answer for this question has brought us where we are today. The desire to overcome the hurdles and shine was uppermost in our mind.

Correspondent: What is your future plan as a dancer and as an activist?

Narthaki Nataraj: My future plan is to take up the knowledge I have gained till date to the next generation. In this fast moving world even the art has become fast instant and fake.

But I want to show them the real traditional Tanjore bani nayaki bhava form and make them realise that the real success is in preserving and holding on to the roots.

But things are definitely improving. Recently my life story was added in a lesson to the 11th std students by Tamil Nadu educational board.

I hope after reading my story parents and also the students will start being more friendly, understanding and supportive to their classmates and friends who are born like me.

It is also very welcoming move by many social organisation, school and colleges that are inviting me more and more to conduct programs, lecture demonstration and performance for the students.

Correspondent: What changes do you want from the government for your community?

Narthaki Nataraj: Be it government or general public, the first thing we ask for is recognition. People should realise that we are as natural as other. We too have born out of a mother's womb. We too need family. You have quota for minority class based on caste and religion but there is no space for our community.

If the government can give at least 1 per cent of quota for us in education and employment, we can definitely make a mark for ourselves and contribute for the upliftment of the society.

We have the capability of both men and women physically and mentally. All we need is a chance to prove.

Correspondent: Which is your favourite sari?

Correspondent: What was your inspiration to be a dancer?

In fact that's how I reached Kittappa Pillai. I wanted to learn from the same Guru from whom she learnt and I landed at the doorsteps of my Guru.

Correspondent: Why did you choose Bharatanatyam and not any other form of dance? (What do you like the most of the dance form?)

Narthaki Nataraj: I am a Tamizhian born at Madurai. Whatever I learn in my life I relate it to the culture and traditions of our soil. So it is natural that I took bharathanatyam as it the dance of our land. The Tamizh language has three main components Iyal i e. Literature, Isai i e. Music and Nadagam i e. Theatre. And dance is an important part of it. And I feel bharathanatyam had all three components in it. And I can relate to all other art through this art form.

The Padma awards are conferred in three categories, namely, Padma Vibhushan, Padma Bhushan and Padma Shri, the second, third and fourth highest civilian awards of the country respectively, only after Bharat Ratna.