As SC strikes down Section 377 of IPC which criminalised homosexuality, a gay youth talks about what it means, to him and the community. 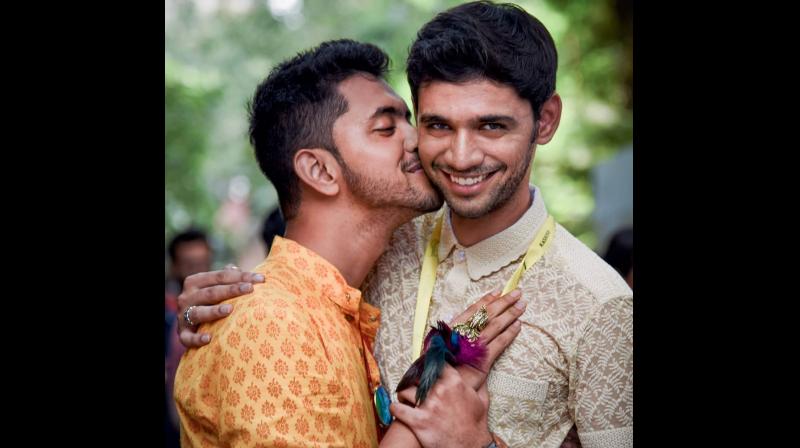 “The verdict changes everything,” an excited Sanyal (Left, seen here with his partner Ankit Andulkar) says revealing that while growing up was not easy, things are sure to look better now. (Facebook: Debendra Nath Sanyal)

In a historic judgement, after years of deliberations, the Supreme Court struck down the Section 377 of the IPC which criminalised homosexuality.

The decision, being welcomed by LGBTQ activists and community members from around the world has made one Mumbaikar (among many others) very happy.

He says he has had an anxious night and the current state of mind he is in, is simply, “unreal”.

Speaking about the verdict Sanyal says that he had been watching news on a loop just trying to get to terms with it. “I cannot believe that the SC has finally ruled in our favour,” he quips.

“Mentally I had prepared myself for any outcome, but was hoping that by the time I reach office, the verdict would be out and I would have some time to compose myself and bring back come semblance of sanity in me.”

Thankfully for Sanyal, his workplace is pro-LGBTQ and they allowed him to savour the moment and answer the many congratulatory calls he has been receiving since the verdict came out.

“The verdict changes everything,” an excited Sanyal says revealing that while growing up was not easy, things are sure to look better now.

“I knew something was different about me since I was in my sixth standard, my biological reaction to girls and their changing bodies were not similar to the straight friends in my class. I was never interested in the other gender,” the youngster says adding that being an effeminate child, meant he was a ready target for bullying and verbal abuse throughout his school days.

And to combat that societal acceptance is very important Sanyal believes.

“Growing up, one tries to blame their orientation on a host of external factors rather than coming to terms with the truth,” Sanyal says, adding, “For me, my friends were the one who accepted me for who I was and put me at ease in my own skin.”

From being a youngster who felt his orientation was something to be ashamed of to coming out to his friends, Sanyal’s journey helped him realise there was nothing wrong with him. Participating and winning in Mr Gay India only cemented his belief.

“Acceptance started not with me, but rather with friends and society. And that is where the judgement becomes even more important. It gives people from the community a chance to come out, without fearing ostracisation.”

Sanyal goes on to add that the looming Sec 377 always made him conscious of who he was, but the judgement turns that around, not only for him, but everyone.

Sanyal has been living with his partner Ankit for almost a year now, and while their landlord is okay with it, they have sleepless nights thinking how their neighbours would react if they ever found out.

“There was a constant sense of insecurity, but after today the fear dissipates.”

Sanyal believes that while today’s verdict may not empower youngsters to go and readily come out to their close ones, but it will allow them to have a conversation with themselves.

“The verdict will allow a lot of people to at least have a discussion about the topic and community and not just shove it under the carpet as they have been doing all these years.”

He goes on to add, “For some reason everyone thinks that the LGBTQ community is a very small, but now the judgement will give voice to a lot more people and help them unite. They won’t feel that they are the odd one out.”

Ask him about possible backlashes and he concludes, “Being gay in India meant you were a criminal. It was not something to be proud of, looked down upon. But now all that won't be there. You can actually celebrate who you love. You can celebrate your queerness.”

“The verdict is out, backlash will be there, but it depends on us, how resilient and consistent we are and now that SC is on our side – We are not criminals anymore,” he concludes.