t will be the first time the cricket-crazy country of 1.2 billion has played in a World Cup game at any level of soccer. 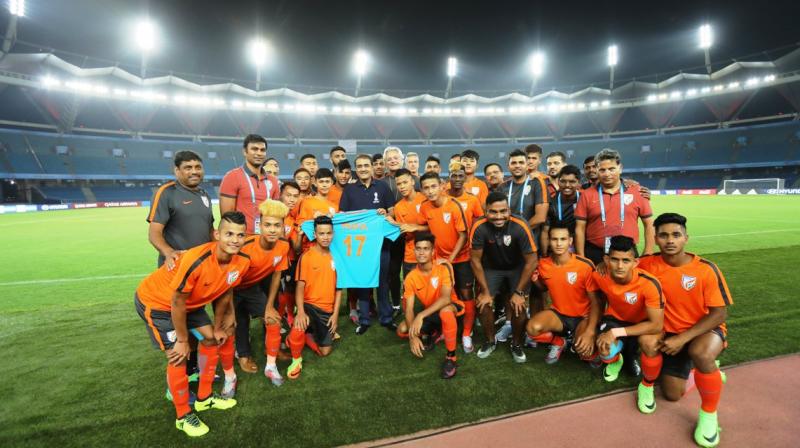 While the event has been the starting point for the stars such as Ronaldinho and Neymar, this edition will be missing some of the brighter lights in the age group. (Photo: Twitter)

Kolkata: India's team will set a benchmark regardless of its result against the United States in the Under-17 World Cup on Friday. It will be the first time the cricket-crazy country of 1.2 billion has played in a World Cup game at any level of soccer, and the anticipation is high in the host nation.

Organizers are confident that the government's 1.2 billion rupees ($18.5 million) investment in renovating stadiums in six cities to host the 24-team tournament will help showcase the country as a venue for major events.

The Indian public is keen to put memories of the scandal-hit 2010 Commonwealth Games in New Delhi behind them, and Prime Minister Narendra Modi's government hopes to promote football across the country through the Under-17 event. The country's leading sports celebrity - India cricket captain Virat Kohli - lent a big hand with the public relations push locally by posting a video message for the team to his 18.8 million Twitter followers saying "Good Luck boys, make us proud!"

But while the infrastructure and facilities were ready well ahead of time and the anticipation is growing around the Oct. 6-28 tournament, analysts and commentators have urged football fans not to place unrealistic expectations on the team.

Luis Norton de Matos, who took over as head coach in March to replace Nicolai Adam, is among those calling for patience as his lineup takes "a first step for the future" of the game in India.

In the first of their three group games in the capital, India will play a U.S. team featuring Tim Weah, the son of the 1995 world player of the year, George Weah of Liberia, who played for PSG, AC Milan and Monaco during his career. Games against Colombia and two-time champion Ghana follow.

"There is a gap between India and the other teams, say from Europe and South America," de Matos was quoted as saying last month by Press Trust of India. "So, I don't think much about the results and chances but I know my players will give their best. I see this World Cup as a step forward for the future ... India can build on this experience."

"This cycle of players is unique in terms of the quality, depth and work ethic of the group," U.S. head coach John Hackworth said as he unveiled his squad. "The biggest challenge in selecting this roster was the competition for spots at almost every position. Our team is ... motivated to prove themselves on the world stage."

Nigeria, which has won the last two titles and five overall at the under-17 level, didn't qualify from Africa, leaving three-time champion Brazil as the most successful country in the tournament.

While the event has been the starting point for the stars such as Ronaldinho and Neymar, this edition will be missing some of the brighter lights in the age group.

Highly-touted Flamengo forward Vinicius Junior, who will join Real Madrid in 2019, missed the Brazil team's trip to India, while Jadon Sancho will only be available for England in the group stage.

The England squad includes Angel Gomes, who made history last season when Jose Mourinho introduced the attacking midfielder as a second-half substitute for Wayne Rooney in Manchester United's last game of the Premier League season against Crystal Palace.

With his brief appearance, Gomes became the first player born this millennium to play in the Premier League. He'll be eager to make amends for missing out on England's run to the final of the European Under-17 Championship because of injury.

England is in Group F and will play its three group games - against Chile, Mexico and Iraq - at Kolkata's Salt Lake Stadium.

Due to concerns over teams fielding older, ineligible players, FIFA has introduced more stringent testing for age verification at this year's tournament.