Newsmakers   06 Dec 2017  #SaltBae: Saying goodbye to the man and the meme that kickstarted 2017
Newsmakers

#SaltBae: Saying goodbye to the man and the meme that kickstarted 2017 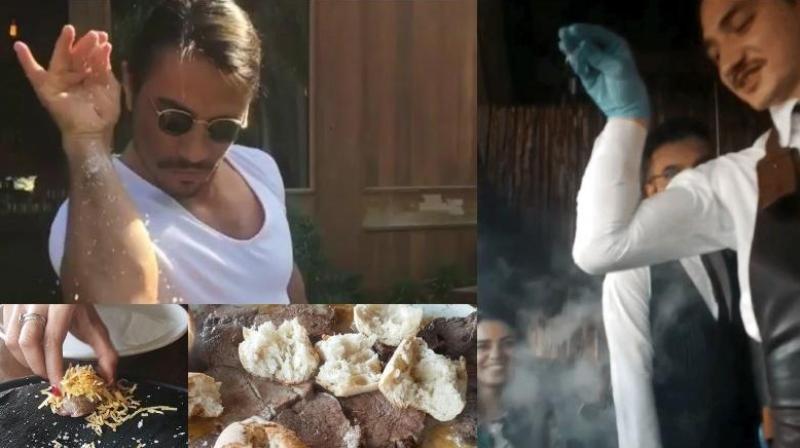 The man (and his food) behind the meme. (Photo: Alfea Jamal)

Turkish chef Nusret Gökçe aka Salt Bae has become the epitome of being 'extra'.

Gökçe rose to fame as 2017’s first meme, when a video of him flamboyantly sprinkling salt on a carved steak spread like wildfire on social media.

The chef uploaded the clip titled, “Ottoman steak” on Instagram on January 7, 2017. 48 hours later the video garnered over 2.4 million views and over 8700 comments.

One Twitter user reposted the video soon after and cleverly dubbed him #SaltBae.

My friends: Do you have to be so dramatic?
Me: pic.twitter.com/2yM7V7Ngt4 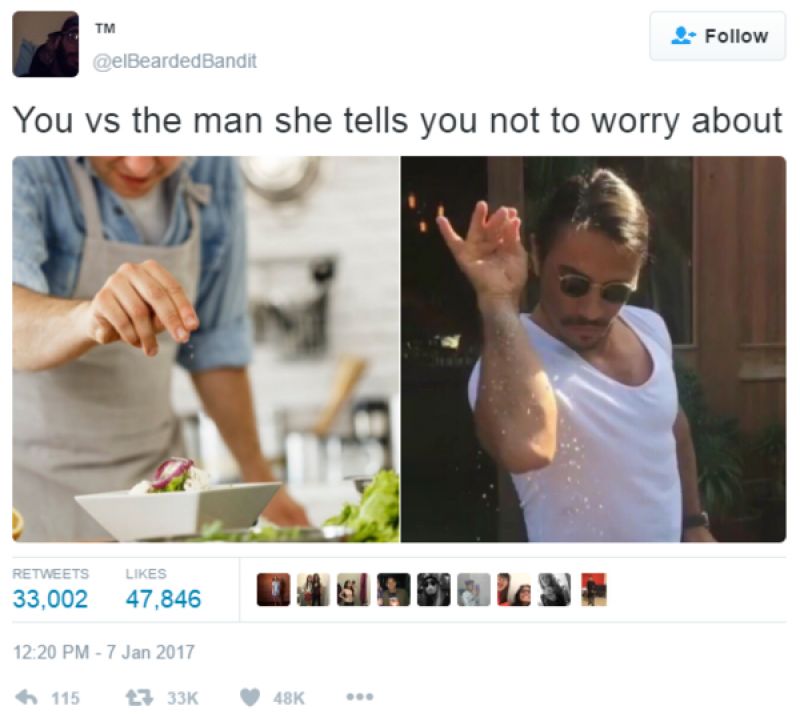 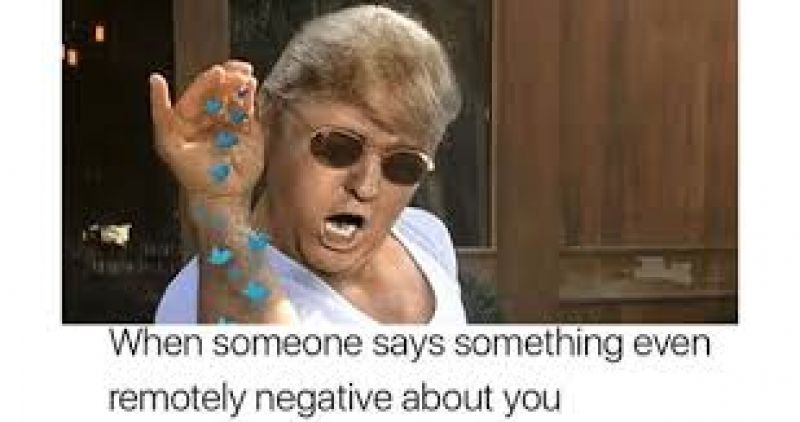 Over the past year the video has gained over 15 million views.

Bae does more than just salt your meat

Before his notoriety, Gökçe was already well-known thanks to his culinary prowess. He has three restaurants to his name, quite literally all of them are called Nusr-et, located in Istanbul (2010), Dubai (2014) and Abu Dhabi (2017).

Being a child of the Internet, Salt Bae instantly caught my eye, and when I recently visited Dubai I found the perfect way to say goodbye to the first and most iconic meme of 2017:  by dining at Nusr-et.

The Internet has the ability to make garbage look appealing, and I wanted to find out if Salt Bae was just a really good meme or actually worth his salt.

The restaurant was located in the courtyard of the Four Seasons, Dubai and looked rather simplistic from outside, a simple wooden board with 'Nusr-et' engraved in the signature style.

As I walked in I felt like I was in a very plush yet rustic wooden cabin. The structure and interiors reminded me of a chalet. The ceilings were high, the lights and decor surprisingly minimalistic but the bar was well stocked and the meat display took the cake.

I was taken to my table by a very polite server, and he had a rather majestic moustache which is apparently part of the dress code at Nusr-et.

Having rehearsed what I was going to order, I didn't even bother to browse through the one-page menu. So, here’s a look at the food on my table. 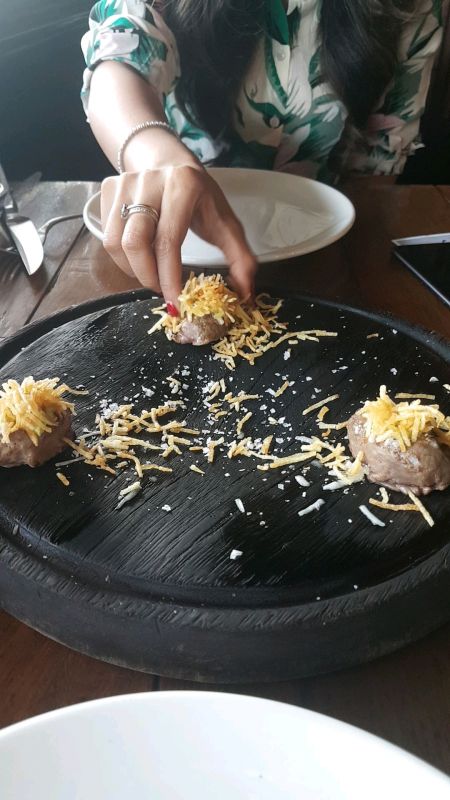 Now raw beef might sound unappealing, but at Nusret they don’t serve it uncooked. The server torched this fine piece of meat right at my table. The smoky taste of the meat was complimented with rice, avocado, cheese and pomme frites, which blew my taste buds away. 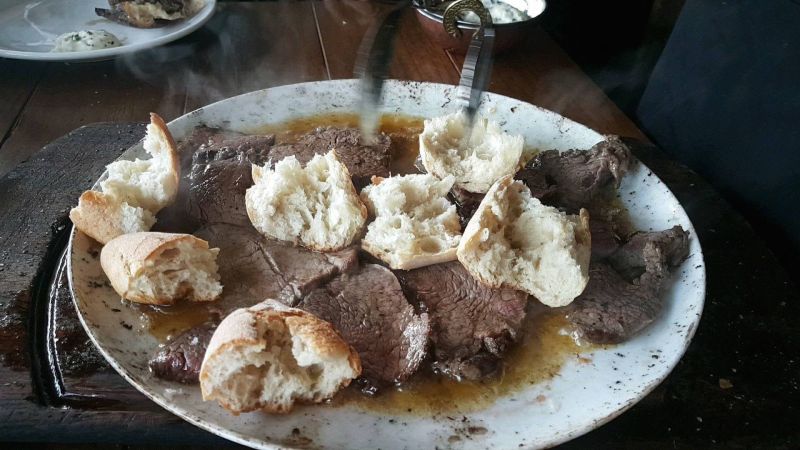 The pinnacle of the meal was a very theatrical experience. The beef was cut and prepared at our table, seared in butter, topped off with two sourdough baguettes that were torn onto the giant platter and seasoned only with salt.

And yes, our server salted the meat #SaltBae style to my utter delight.

I ordered a side of potato mash and spinach to go with the mains. Other than the theatrics I was overtaken by the tender meat. Cut into thin slices, the beef was soft and melt in the mouth, the bread was doused in butter and along with the sides, each mouthful was heavenly. 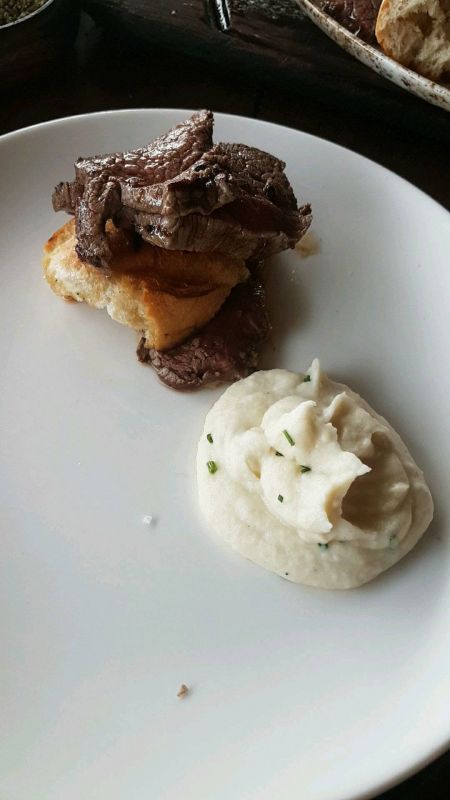 The sides, creamy potato mash and blanched spinach elevated the flavour of the meat.

I wasn't spoilt for choice in this department as there was just one dessert on the menu: Baklava ice cream.

The server got the entire baklava tray to our table and assembled the dessert right before my eyes.

In true Nusr-et style, the servers put on a show for the finale as well.

The sticky ice cream was cut and sandwiched between the large baklava and chopped into bite-sized pieces. The baklava was rich with crunchy pistachios and syrup, but somehow not the overpowering and sickening sweetness one usually gets in syrupy desserts.

Although the Nusret special was the highlight, the dessert is something one shouldn’t miss.

So with my foodventure with Salt Bae complete, I say bring on the memes of 2018 for more adventures beyond the screen.