Maharashtra tiger to get prosthetic limb with surgeon's help

The feline, whose paw was amputated, was two years old at the time of the incident. 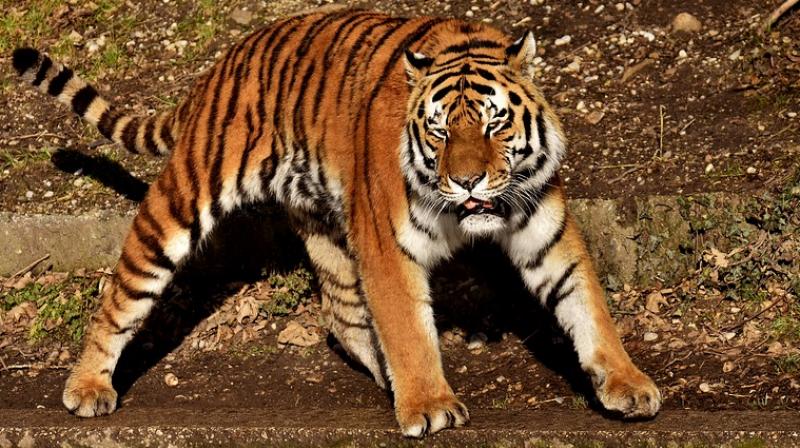 Babhulkar has adopted the eight-year-old tiger, now housed in the newly-opened Gorewada Rescue Centre in Nagpur.

Nagpur: A renowned orthopaedic surgeon and a group of veterinary doctors have come together to implant a prosthetic limb on a tiger whose paw was amputated in 2012.

Besides orthopaedic surgeon Shushrut Babhulkar and veterinary?doctors of the Maharashtra Animal & Fisheries Science University (MAFSU), experts from IIT-Bombay and abroad will be working to provide relief to the tiger, `Sahebrao'.

Babhulkar has adopted the eight-year-old tiger, now housed in the newly-opened Gorewada Rescue Centre in Nagpur.

Sahebrao had injured its front left paw after it got entangled in a steel trap laid by poachers near a waterhole in the Palasagaon forest range of the Tadoba-Andhari Tiger Reserve in Chandrapur district in 2012.

The feline, whose paw was amputated, was two years old at the time of the incident.

Speaking to PTI, Babhulkar said four to five days back, he along with his family visited the centre where many rescued wildlife animals had been kept.

"While in the rescue centre, I saw this huge tiger, probably one of the biggest in the world, in amputated condition barely able to walk and growling in pain," he said.

"Subsequently, I spoke to authorities concerned and offered to help treat the tiger," Babhulkar said, adding he then adopted the wild cat.

The surgeon said he will take help from veterinary doctors from abroad and ensure that Sahebrao starts walking gracefully.

The tiger will be treated in two phases, each spread over three to six months.

"In the first stage, we will be working to treat the pain the tiger is going through. Subsequently, an artificial limb will be implanted on its amputated limb."

Babhulkar said the IIT-Bombay will be helping in the treatment process by providing technological support in form of 3D printing of the left limb.

"Endolight, an American artificial limb manufacturing company, has shown interest in helping in the treatment of the tiger.

"I will work as a facilitator and best available treatment will be provided to Sahebrao," Babhulkar added.