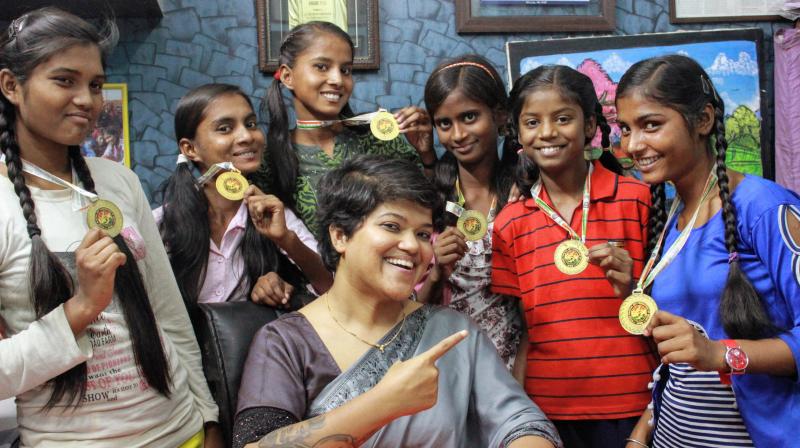 Sonal Kapoor with children of Protsahan. (By Arrangement)

On Women’s Day, we salute a few ordinary women, mostly from rural and marginalized sections, who have braved tough challenges and are doing extraordinary work to secure the rights and ensure the welfare of other women and children.

Gauri Sawant - 'I saved her from being sold'

Transgender activist from Mumbai, Gauri Sawant, came under the arc lights when she adopted a deceased sex-worker’s daughter after a legal struggle for the right. Since then, Gauri has sheltered, educated and taken care of 9 children of sex workers. Talking about her adopted daughter Gayatri, she says, “I saved her from being sold in Sonagachi (red light area of Kolkata) and brought her to my place. She gave me the feeling of being a mother. Gayatri, now 22, is very intelligent, and pursuing dentistry abroad.”

Gauri is also the director of Sakhi Char Chowghi, an NGO that helps transgenders and people with HIV/AIDS. She was made the goodwill ambassador of the Election Commission in Maharashtra and has featured in commercials of Vicks and TV programmes like KBC.

In her message for women, Gauri says, “Love and respect yourself, and automatically, you will be able to love and care for others. Women are Aakash (sky), they are Brahmanda (cosmic creation, the Universe), they are beautiful. Also remember, just giving birth to a child doesn’t make you a complete woman or mother. Motherhood is a behaviour and experience, how you love and care for someone involves an approach not guaranteed by giving birth.”

Maya Vishwakarma - ‘We women can achieve anything’

The ‘Padwoman of India’, Maya Vishwakarma is the founder-president of Sukarma Foundation, an organisation creating awareness on menstrual hygiene in the tribal areas of Madhya Pradesh. Hailing from an agricultural family in Mehragaon village of MP, Maya was a researcher in cancer biology in California, USA. Currently, she is a full-time volunteer with Sukarma Foundation. She is also a motivational speaker and social entrepreneur.

“Since 2017, at our mini factory, we have started manufacturing affordable low-cost sanitary napkins for tribal and rural girls, named ‘No tension.’ It provides employment to local women and raises awareness on menstruation. The objective of this project is to protect tribal and rural girls/women from infections such as RTIs (Reproductive Tract Infections), UTIs (Urinary Tract Infections) and Cervical Cancer by educating them about menstrual hygiene,” says Maya, who herself had never used or even heard about a sanitary napkin till the age of 26 and suffered various health issues due to infections.

“To all the women and girls out there, I want to say that every woman has a unique talent and courage. Don’t consider yourself weak or small. All of you can do something good if you really want to do it. We have only one life. At some point in life, take the decision to do something different. Don’t be scared. We need to stay strong and aware that we are not less than men and can achieve anything,” asserts Maya.

54-year-old Viji Penkoottu from Kerala is a human rights activist and union leader who founded the women’s organization Asanghaditha Mekhala Thozhilali Union. A tailor by profession, Viji fights for basic rights and better working conditions for women labourers in the unorganized sector.

She came to the forefront when she led the ‘right to sit’ struggle for women salespersons in shopping malls and shops in Kerala and also conducted campaigns for toilet facilities for women workers in the textile sector. Finally, the state government amended the Kerala Shops and Commercial Establishment Act to ensure a comfortable working environment for women employees and provisions for seating.

She is one of the three Indian women to be featured in BBC’s list of 100 most inspirational and influential women from across the world in 2018.

Viji says, “We women should move ahead from the path of compromise to that of claiming our rights. Women should claim their rightful status as individuals beyond the shackles and restrictions imposed on them by society. For that we have to work together.”

When asked about her motivating force, Viji says, “My inspiration is my mother (who initially was very adjusting and forgiving and then gradually changed to claiming her rightful place in society). Apart from her, a woman rights activist and former Naxalite Ajithaa, who came to our area to conduct an awareness camp on countering domestic abuse, impressed me.”

During a film shoot in 2010, Sonal Kapoor met a young woman who had six daughters and was pregnant with her seventh child. The woman said she was ready to strangle her new-born if it was another girl. She also spoke of sending her eight-year-old daughter to an unorganized brothel so that she could feed the rest of her family.

“Within the hour, the idea of starting a unique creative school began taking shape. Three weeks later, the Protsahan India Foundation started as a one-room creative arts and design school in one of the darkest slums in the heart of New Delhi to rescue that particular child, and many more like her from abuse. Since then, Protsahan has rescued over 970 girls and successfully mainstreamed them into formal schools. It reaches out to 81,000 girls annually through programmes in India,” says Sonal, who is also an expert committee member on anti-child trafficking (Delhi Commission of Women).

Sonal says, “We are working to empower adolescent girls from difficult backgrounds of intergenerational poverty, violence and abuse to access quality education with financial independence, healthcare and social protection. During the pandemic, Protsahan was a nodal body in providing support for Covid orphans and widows as cash relief and academic scholarships, along with capacity building of child protection staff. The organisation also developed a flagship psychosocial training module for UNICEF and Childline 1098 functionaries working with vulnerable children across the country.”

“Children who’ve faced severe adversities in childhood need care and healing. We need to work to build good empathetic child-care systems that listen to and deliver for the children in the country”, says Sonal, as her Women’s Day message.

Banker Chetna Gala Sinha is a social activist working to empower women in drought-prone areas of rural India by teaching them entrepreneurial skills, and facilitating access to land and means of production. Chetna started India’s first rural women’s bank. She also started India’s first business school for rural women entrepreneurs. Through the Mann Deshi Bank and Foundation, she serves over five lakh women, and her goal is to create more women entrepreneurs.

Chetna, who was one of the six co-chairs of the World Economic Forum, Davos 2018, has received many awards, including the Nari Shakti Puraskar – the highest civilian award recognising the achievements and contributions of women in India. She has also won the Forbes India Leadership Award 2017: Entrepreneur with Social Impact, and the Jankidevi Bajaj Puraskar for Rural Entrepreneurship 2005, among other prizes.