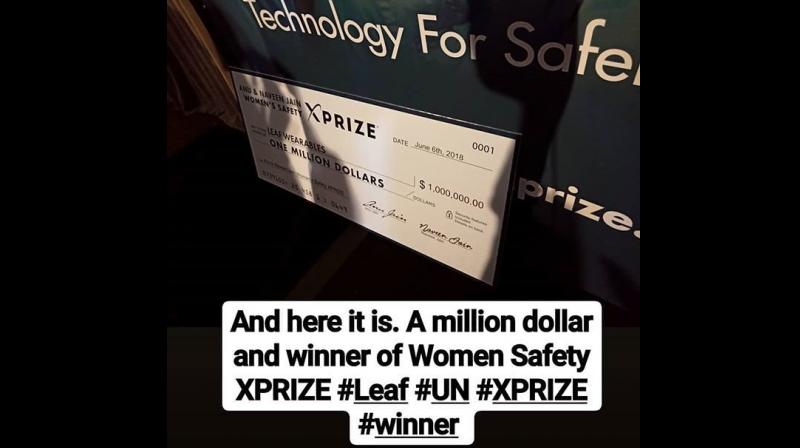 United Nations: A group of young Indian entrepreneurs, inspired to find solutions for women safety following the December 16, 2012 gangrape, have won a million dollar prize by developing a wearable smart device that women can use to send out emergency alerts if threatened or assaulted.

The technology start-up, founded by students of IIT Delhi and Delhi Technological University, won the prize for their project 'Safer Pro', an enhanced new version of their earlier smart safety devices.

The Jains, prominent entrepreneurs and philanthropists, partnered with non-profit organisation XPRIZE to create the Anu & Naveen Jain Women's Safety XPRIZE aimed at addressing the safety of women and girls by leveraging technology.

"Women safety is a global problem, it's a global epidemic. A safe environment for women is a fundamental human right, it should not be considered a luxury and yet in today's world, with so much advancement in technology and innovation, we still haven't been able to solve this problem,” Anu Jain, the founder of the Women's Safety XPRIZE, told PTI at the award ceremony organised in the UN on June 6.

Teams participating in the challenge had to create a device, costing no more than USD 40 and able to work without internet, that can inconspicuously trigger an emergency alert if a woman is facing a threat and transmit information to a network of community responders, all within 90 seconds.

"It was in 2012 that the Nirbhaya rape took place in Delhi," Mehta, the start-up's co-founder said, adding that it was then that they decided "enough is enough. Delhi is unsafe and things are not changing at all. We have got to solve this problem."

The start-up has previously launched two wearable devices. "We are not saying we have made the perfect device. We are saying we are (working) on the problem and we are going to make one billion families safe and connected," Mehta said.

Niharika said, being a woman, she understands the need for such solutions but it is "excellent that people understood too that women safety is a global need."

Going forward, the team will continue to work on its product and improve it. Rajiv said so far the product has focused on getting the information out if someone is in a situation where they feel threatened and the next mile is to ensure that help gets to them. She said the prize money will help "jumpstart all our efforts."

The smart device by Leaf Wearables will also be able to make audio recordings, giving valuable proof and evidence to the women using it.

Anu Jain said that instead of using the traditional philanthropic route, she and her husband decided to "crowdsource" to find solutions that ensure women's safety.

"The mindset that perpetuates violence and discrimination against women and girls needs to change but we cannot wait for that to happen. Our goal is to do something today, use technology to find solutions fast," she said. "We wear technology everyday, we are counting our every footstep through technology. Let's use that technology and innovation to provide safety for women and girls around the world," Anu Jain, co-founder of technology company InfoSpace, added.

Naveen Jain, founder of several technological companies including Moon Express, Viome and Bluedot said that none of the solutions and projects required cell phone or wifi, so even if a women's phone is taken away or she is in a basement, the wearable devices will still be able to track the person's exact location.

Amid growing awareness and activism around women's rights and increasing instances of sexual harassment, the Jains launched the competition in October 2016 with 85 teams competing from 18 countries including Australia, Canada, Finland, Germany, India, Morocco, New Zealand, Norway, South Africa, South Korea, UAE and the US. These teams ranged from university students, scientists, entrepreneurs and parents and victims of abuse. The five finalist teams hailed from the United States, India and Switzerland.

The devices range from smart jewellery that can trigger emergency alerts to other wearables that detect physical gestures and speech recognition for emergency triggers. All solutions were tested live in front of the judging panel and in simulated testing environments in April 2018 including public transportation in Mumbai, taking routes unknown to the teams to test the mobility and advanced functionality of their devices.

The World Health Organisation estimates that about one in three women worldwide have experienced either physical and/or sexual violence in their lifetime.

Founder and CEO of XPRIZE Peter Diamandis said implementing this XPRIZE in India helped the organisation to demonstrate that "breakthrough solutions are borderless and exponential technology can help aid humanity in our most challenging global issues like universal safety."

The finalists were Artemis from Switzerland, led by Nicee Srivastava and Katerina Zisaki, who developed data analytics for wearables and IoT devices, which provide a way to improve women's safety via the ability to trigger an alert through gestures and physiological signals.