The fashion show aimed to redefine the notion of beauty while calling attention to the menace of such attacks. 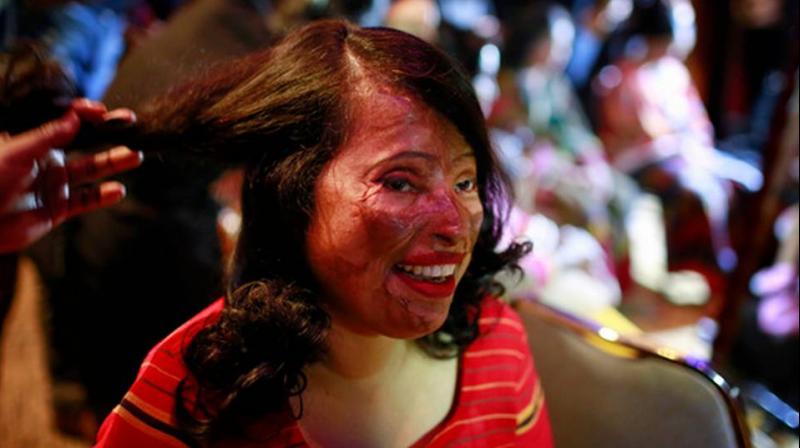 n this March 7, 2017 photo, a Bangladeshi acid attack survivor gets her make up applied during the event 'Beauty Redefined' in Dhaka, Bangladesh. (Photo: AP)

Dhaka, Bangladesh: Teen model Shonali Khatun strutted the catwalk as the audience cheered at a fashion show in Bangladesh's capital.

She and the 14 other models are survivors of acid attacks, common in this South Asian country, where spurned lovers or disgruntled family members sometimes resort to hurling skin-burning acid at their victims.

The fashion show, held Tuesday night in Dhaka and attended by fashion lovers, rights activists and diplomats including the U.S. ambassador to Bangladesh, aimed to redefine the notion of beauty while calling attention to the menace of such attacks.

For 14-year-old Shonali, the event was nothing short of empowering. She was attacked just days after she was born amid a property dispute involving her parents, and was left with burn scars on her face and arms. She spent nearly three years in a hospital and underwent eight operations. Her attacker has never been caught.

The models, including three men, walked the catwalk, dancing and singing and showcasing woven handloom Bangladeshi designs. The show was choreographed by local designer Bibi Russel.

Organizers said they hoped to highlight the fact that acid victims, too often overlooked, are a vital part of society. They deliberately chose to hold the event on the eve of International Women's Day.

"We are here today to show their inner strength, as they have come a long way," said Farah Kabir, country director of ActionAid Bangladesh, which organized the show. "I often take inspiration from them. Their courage is huge."

Bangladesh has struggled to deal with acid attacks in recent decades, and has instituted harsh punishments for the perpetrators, including the death penalty. The country has also trained doctors to treat such sensitive cases and attempted to control the sale of acid, but has failed to eliminate the scourge entirely.

In 2016, some 44 people were attacked with acid in Bangladesh - an annual number that has remained relatively stable.

"I am ashamed of having such things in the country," Kabir said. "Unfortunately, in Bangladesh we do have acid victims because of either gender discrimination or violence, or because of greed. And we want to remind everyone the kind of injustice that has been meted out to them."