This year’s longlist covers both new and well-established writers, like Booker Prize-winning Roy, and a range of genres. 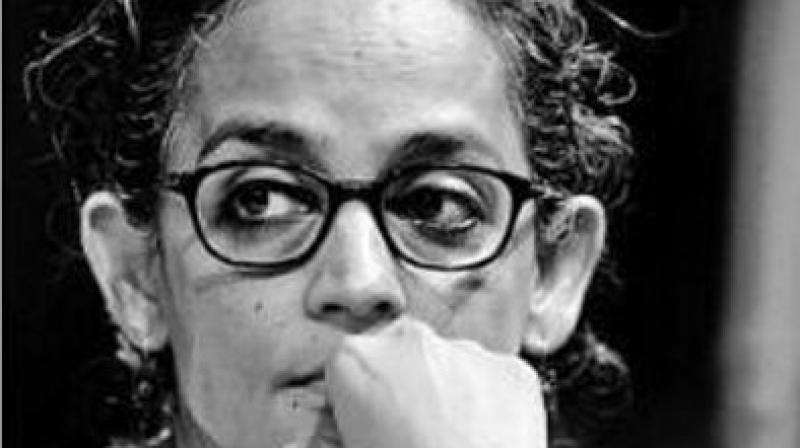 There are six first novels on the list and four nationalities are represented including India – the UK, US and Australia. (Photo: Twitter/ArundhatiRoy)

Two Indian authors are among 16 from around the world to make the cut for the UK’s annual Women’s Prize for Fiction longlist released in London today to coincide with the International Women's Day.

Arundhati Roy's second work of fiction, 'The Ministry of Utmost Happiness', and Meena Kandasamy’s tale of a violent marriage, 'When I Hit You: Or, A Portrait of the Writer as a Young Wife', are in the running for the 30,000-pound prize set up to celebrate excellence, originality and accessibility in writing by women in English throughout the world.

"What is striking about the list, apart from the wealth of talent, is that women writers refuse to be pigeon-holed. We have searing social realism, adventure, comedy, poetic truths, ingenious plots and unforgettable characters. Women of the world are a literary force to be reckoned with," said Sarah Sands, a BBC editor and chair of the judges.

Others on this year's list include British Pakistani novelist Kamila Shamsie for 'Home Fire'; Nicola Barker for H(A)PPY; Elif Batuman for 'The Idiot'; Joanna Cannon for 'Three Things About Elsie'; Charmaine Craig for 'Miss Burma'; Jennifer Egan for 'Manhattan Beach' and Imogen Hermes Gowar for 'The Mermaid and Mrs Hancock'.

The list also includes Jessie Greengrass for 'Sight'; Gail Honeyman for 'Eleanor Oliphant is Completely Fine'; Fiona Mozley for 'Elmet'; Sarah Schmidt for 'See What I Have Done'; Rachel Seiffert for 'A Boy in Winter'; Kit de Waal for 'The Trick to Time'; and Jesmyn Ward for 'Sing, Unburied, Sing'.

This year’s longlist covers both new and well-established writers, like Booker Prize-winning Roy, and a range of genres. There are six first novels on the list and four nationalities are represented including India – the UK, US and Australia. Roy, 56, who won the Booker Prize for her debut novel 'The God of Small Things' in 1997, had been longlisted for the 2017 Booker for 'The Ministry of Utmost Happiness' but missed out being shortlisted.

Set up in 1996 to celebrate and promote international fiction by women throughout the world to the widest range of readers possible, the Women’s Prize for Fiction is awarded for the best full-length novel of the year written by a woman and published in the UK between April 2017 and March 2018.

Any woman writing in English – whatever her nationality, country of residence, age or subject matter – is eligible. Sands leads this year's team of judges that include British Indian journalist and broadcaster Anita Anand, comedian Katie Brand, Women’s Equality Party co-founder Catherine Mayer and actor Imogen Stubbs. The 2018 Women’s Prize for Fiction will be awarded on June 6 at an awards ceremony in central London.

The winner, who will join the likes of previous winners Lionel Shriver, Naomi Alderman and Zadie Smith, will receive an anonymously endowed cheque for 30,000 pounds and a limited-edition bronze figurine known as a ‘Bessie’, created and donated by English artist Grizel Niven.

Tags: uk, women’s prize for fiction, longlist, london, arundhati roy, 'the ministry of utmost happiness', meena kandasamy, violent marriage, 'when i hit you: or, a portrait of the writer as a young wife'