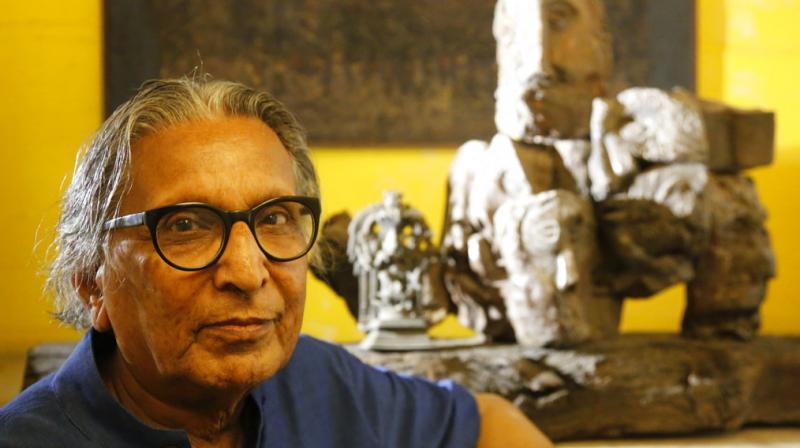 Doshi's ethical and personal approach to architecture has touched lives of every socio-economic class across a broad spectrum of genres since the 1950s. (Photo: AP)

New Delhi: Nonagenarian architect and reputed urban planner Balkrishna Doshi has been named this year’s winner of architecture’s highest honour - the Pritzker Prize, becoming the first Indian to do so.

His designs include the IIM-Bangalore; Centre for Environmental Planning and Technology, Ahmedabad; cultural spaces in Ahmedabad such as Tagore Memorial Hall, the Institute of Indology, and Premabhai Hall; and private residence Kamala House (Ahmedabad), among many others.

The architect also designed Aranya Low Cost Housing (Indore, 1989), which currently accommodates over 80,000 individuals through a system of houses, courtyards and a labyrinth of internal pathways.

Tom Pritzker, chairman of the Hyatt Foundation that sponsors the award made the announcement in Chicago, selecting Doshi as the 2018 Pritzker Architecture Prize Laureate.

Doshi has been an architect, urban planner, and educator for 70 years. The foundation called the 90-year-old's work "poetic and functional," and noted his ability to create works that both respect eastern culture and enhance quality of life in India.

The award ceremony will take place at the Aga Khan Museum in Toronto this May.

Influenced by masters of 20th-century architecture, Charles-Edouard Jeanneret, known as Le Corbusier, and Louis Khan, Doshi has been able to interpret architecture and transform it into built works that respect eastern culture while enhancing the quality of living in India.

His ethical and personal approach to architecture has touched lives of every socio-economic class across a broad spectrum of genres since the 1950s.

"My works are an extension of my life, philosophy and dreams trying to create treasury of the architectural spirit. I owe this prestigious prize to my guru, Le Corbusier. His teachings led me to question identity and compelled me to discover new regionally adopted contemporary expression for a sustainable holistic habitat," Doshi said.

He added the award reaffirmed his belief that life celebrates when lifestyle and architecture fuse.

"The work of Balkrishna Doshi truly underscores the mission of the Prize - demonstrating the art of architecture and an invaluable service to humanity," Pritzker said.

"I am honoured to present the award to an architect who has contributed more than 60 years of service to us all," he said.

"This honour is a fitting recognition of his outstanding work, which has spanned decades and made a notable contribution to society," He said.