The passing of Dilip Kumar, who was born in 1922 in Peshawar, leaves yet another solemn milestone in the history of India 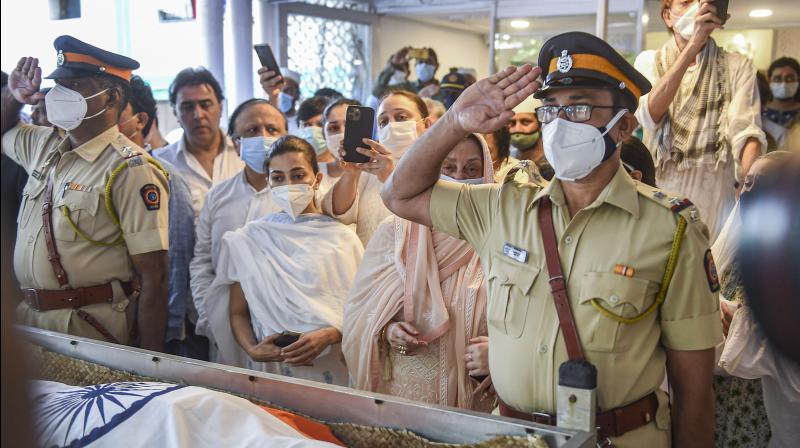 New Delhi: Three generations of Indians and Pakistanis united on Wednesday to mourn the passing of Mohammed Yusuf Khan and to pay homage to an immortal actor and a legend as he was laid to rest at the Juhu kabristan.

Dilip Kumar, an actor, writer, occasional singer and intellectual, whose 65 films serve as milestones in the history of Indian cinema as well as in the making of a modern, Independent India, died on Wednesday at Mumbai’s Hinduja Hospital after prolonged illness. He was 98 and is survived by his wife, Saira Banu.

Khan, known simultaneously and, perhaps, prophetically, as India’s Tragedy King and Nehru’s hero, was given a solemn, stately send-off. Before his body was consigned to the earth, the Tricolour was draped around him. Maharashtra chief minister Uddhav Thackeray and several Bollywood stars, including Shah Rukh Khan, Ranbir Kapoor, Karan Johar and Vidya Balan, visited the actor’s Bandra residence to pay their last respects. Amitabh Bachchan attended the burial ceremony as a tearful Saira Banu looked on at the cemetery.

The passing of Dilip Kumar, who was born in 1922 in Peshawar and named Mohammed Yusuf Khan, leaves yet another solemn milestone in the history of India. It marks the end of an idea that died on the celluloid and off it long ago, but whose aura and promise lingered in the life and works of Dilip Kumar, and in the hearts of many Indians. It was the idea of an India that was shaped on ground by Jawaharlal Nehru, Mahatma Gandhi and Ambedkar, but celebrated and reinforced on screen by India’s film industry whose directors, writers and stars carried the sunshine and bounce of a newly-Independent India with the pledge of a secular, socialist state when they hummed, Suhana safar aur ye mausam haseen...

The first Khan of Bollywood was “discovered” at the age of 19 in Nainital by Devika Rani of Bombay Talkies while he was looking to buy fruits for his father's business.

Though he dreamt of being a Test cricketer, he went to meet her in Bombay and was presented with three names to pick from — Jehangir, Vasudev and Dilip Kumar. He picked one but learnt later, from the poster of his first film, Jwar Bhata, that another name had been chosen on his behalf.

The film didn’t do well, but it launched a career that has served as the guiding spirit for some of India's best and biggest stars since.

Kumar, who had impeccable Urdu and Hindi diction, remains a daunting, revered presence in the Indian film industry not just because of the awards and accolades he received for his acting, but because with almost every role that he played he created a template for that character.

From prince Salim defying his father for a kaneez (in K. Asif’s Mughal-e-Azam) to the dacoit Ganga (Ganga Jamuna, which he wrote), from the despairing, alcoholic lover Devdas to trade union leader Sagina (Sagina Mahato), from the principled cop in Shakti to separated-at-birth twin brothers Ram Aur Shyam, there is little that his oeuvre didn't cover.

Kumar used silence, pauses and whispers to deliver his dialogue with such impact that they have become idioms for state of being. After Kumar, there can only be amusing imitations of his perfect delivery of these immortal lines from Devdas: “Kaun kambakht bardasht karne ke liye peeta hai? Main toh peeta hoon ki bus saans le sakon.”

A perfectionist who took his craft to heart and home, he was known to prepare intensely and for days for roles, and his finicky nature was on display even in his colour-coordinated wardrobe where the rule was, “White is white and off white is off white”.

But what he poured into his tragic roles seemed to come from a sadness within that had begun to cast a shadow. So Kumar consulted psychiatrists and made a conscious and very successful transition to lighter roles. His comic timing and crackling laugh were as joyous and charming as his inimitable, inebriated sorrow was romantic.

Kumar, who worked with the stalwarts of Indian cinema — from Mehboob Khan and Bimal Roy to B.R. Chopra and K. Asif, giving Indian cinema its stunning magnum opus (Mughal-e-Azam) that remains unrivalled to date in its grandeur, scale and perfection — and all the leading actresses of his time ended his acting career playing principled, angry old men disappointed over crime passing without punishment.

A devout Muslim, and amongst those who chose to stay in India after Partition, Dilip Kumar was well-read, eloquent, played chess and bridge, the sitar, the violin and took active part in building Nehru’s India.

Along with Raj Kapoor and Dev Anand, he would often participate in fundraising drives for war widows and flood relief where, often, along with money, fans would hand him a comb to tame his incorrigible zulfain.

He was also called upon to campaign for V.K. Krishna Menon in the 1962 Lok Sabha elections, and was later appointed the Sheriff of Mumbai, a stint marred by his long absences from Mumbai. Amul went to town with “The Sheriff is out shootin” posters.

On and off screen Kumar carried the idea and ideals of Nehru's modern, secular India with impeccable grace and candour, and that’s why the news of his secret second marriage to Asma Rehman was shattering for many. What was even more shocking was that when the story broke in 1981, his wife Saira, 22 years his junior, was clueless, though Asma had been living with Kumar’s sisters across the road from his and Saira Banu’s house on Pali Hill.
This, however, was not the first time his personal life had made it to the gossip columns. Kumar’s affair with a married Kamini Kaushal was much talked about, as was his romance with Madhubala that began with her presenting a rose to him on the sets of Mughal-e-Azam and ended in a courtroom drama where he declared his love for her.

But all these scandals faded from public memory and Kumar’s demigod stature was resurrected, in some part because of his wife’s unstinting support, but mostly because of the love of fans for the thespian. He got nominated to Rajya Sabha, was often requested to participate in charitable activities, received the Padma Vibhushan, Dada Saheb Phalke award, as well as Pakistan’s highest civilian award, Nishan-e-Imtiaz, which he went to receive after consulting the then Prime Minister, Atal Bihari Vajpayee.

The death of Mohammed Yusuf Khan and Dilip Kumar on Wednesday, July 7, is truly the end of a golden era of India and its cinema where young men and women on bicycles, railway stations with tongas waiting outside and an India under construction held the pledge of a secular, modern nation, but also an era where a Muslim man was known by a Hindu name.

The world that Dilip saab's films conjured -- where white was white, and off white was off white -- can be revisited, but its spirit is dead. What's left is a long list of shelved dream projects, some incomplete films and a broken promise — the promise that India and Nehru’s hero once held.