Tributes for the former Union minister have been pouring in from across the world. 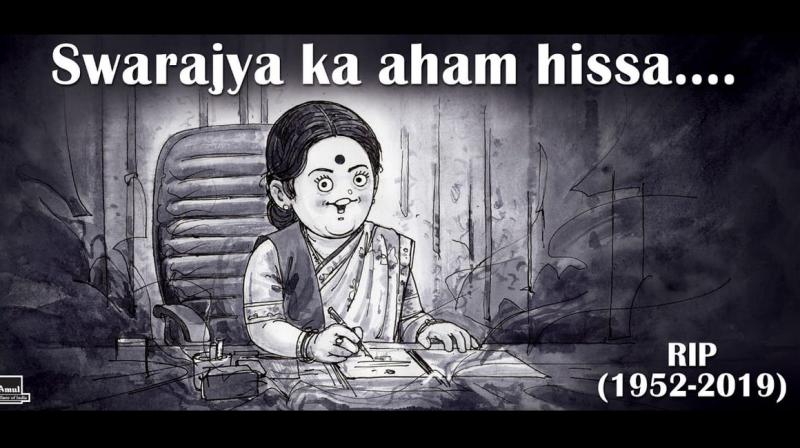 Tributes for the former Union minister have been pouring in from across the world. Among them is Amul, who also joined in to say goodbye to the strong leader and extraordinary orator.

“Tribute to Sushmaji, respected lawyer and leader,” Amul wrote along with a black and white graphic of Sushma Swaraj.

The tweet that was shared on Tuesday evening has collected approximately 5000 ‘likes’ and more than 1000 retweets. Netizens are sharing their reactions on tweet that left many teary-eyed.

“I think this cartoon aptly describes her. Ever smiling, hard working, her evident Bindi, jacket and saree. Great tribute to the departed soul,” says one Twitter user. “Your creative team always leaves us amazed and smiling. It brought tears this time,” says another.

Sushma Swaraj had a strong presence on Twitter and even turned the micro-blogging site into a kind of helpline. People from all walks of life reached out to the minister for her help and she made sure that efforts are being taken to reply and fulfill most of the requests.

Swaraj was also known for her witty replies. However, her several quirky tweets are again doing rounds on social media as a memoire.

The former foreign minister, who died at the age of 67 due to cardiac arrest at All India Institute of Medical Sciences (AIIMS) in Delhi on Tuesday night, was cremated at Delhi’s Lodhi Road electric crematorium on Wednesday with full state honours.

The last rites were performed by her daughter Bansuri Swaraj, as her husband Swaraj Kaushal stood beside her.