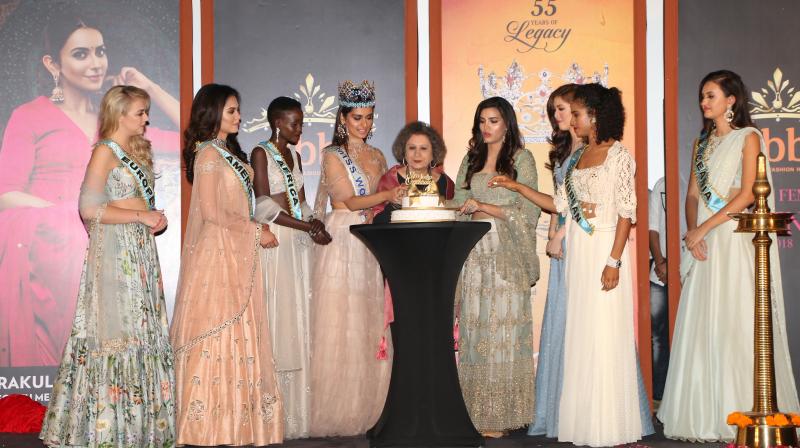 The Organisation also revealed that the auditions for Miss India 2018 will commence from February 9.

Mumbai: After traveling across the country as a part of their Beauty with a Purpose (BWAP) Tour, Miss World Organisation along with six continental winners came together with Miss India Organization to celebrate the 55 years of legacy of fbb Colors Femina Miss India 2018 at Carnival Cinemas, Imax Wadala.

The press conference saw 30 school children of Muktangan School representing 30 states sing the National anthem highlighting the fact that this year too the pageant will explore potential talent in all 30 states of India (including Delhi).

Speaking at the event Chhillar said that she was elated and excited as her BWAP project which is on menstrual hygiene is being supported by the Miss World Organisation and that it has been started in her home country India.

Chhillar also spoke about how it was Stephanie who crowned her at Miss India as well as Miss World pageant and  gave advice to all those contestants that are aspiring to be Miss India.

The Organisation also revealed that the auditions for Miss India 2018 will commence from February 9 with Andhra Pradesh auditions happening at Vizag and the top 3 contestants from every state will proceed to the State’s Zonal crowning ceremony which will be held in Bangalore (South Zone) on February 24, Kolkata (East Zone) on March 22, Delhi (North Zone) on April 12 and Pune (West Zone) on May 13.