Both the athletes went public with their homosexuality in October 2015, and felt better for it. 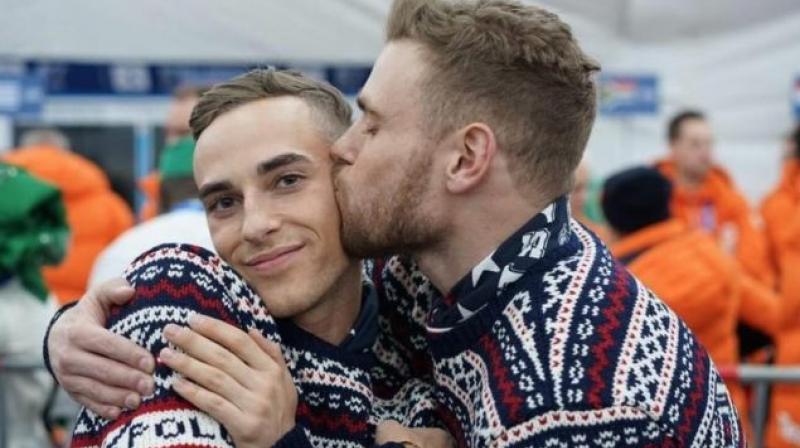 "When I came out was when I was able to breathe," Rippon said. (Photo: Twitter/Gus Kenworthy)

Adam Rippon and Gus Kenworthy will have groundbreaking performances at Pyeongchang no matter how they perform, being the first openly gay US men competing at a Winter Olympics.

Photos of the duo hugging each other at the Pyeongchang Games' Opening Ceremony, which took place Friday morning emerged on the Internet, with a simple message: 'We're here. We're queer. Get used to it'.

Tonight I walked in the #OpeningCeremony and got to watch my old friend @Yunaaaa light the Olympic flame. Representing the USA is one of the greatest honors of my life and being able to do it as my authentic self makes it all so much sweeter 🇺🇸🏳️‍🌈🏆🌎❤️🔥 pic.twitter.com/ZypvWkUBjD

British-born Kenworthy will try to improve upon the freestyle skiing slopestyle silver medal he won in 2014 at Sochi, while figure skater Rippon, the 2016 US men's champion, competes in his first Olympics.

Both the athletes went public with their homosexuality in October 2015, and felt better for it.

"When I came out I was scared of losing sponsors and losing fan base," Kenworthy said. "It has been just the opposite."

Rippon, 28, said he found it liberating to reveal his most personal secret, reviving his passion for skating.

"When I came out was when I was able to breathe," Rippon said. "When everyone knew, I didn't feel like I was hiding anything."

The #OpeningCeremony is a wrap and the 2018 Winter Olympic Gaymes are officially under way! I feel incredibly honored to be here in Korea competing for the US and I'm so proud to be representing the LGBTQ community alongside this amazing guy! Eat your heart out, Pence. #TeamUSA #TeamUSGay 🇺🇲🏳️‍🌈

"I would absolutely not go out of my way to meet somebody who I felt has gone out of their way to not only show that they aren't a friend of a gay person but that they think that they're sick," Rippon told USA Today last month.

According to US media, Pence also denied a separate USA Today report Thursday saying he reached out for a conversation with Rippon in Pyeongchang and was rejected.

Kenworthy, 26, recalled his worries before coming out in a magazine article.

"That was a scary time but it was something I wanted to do. I didn't sleep the night before the magazine came out," he said.

Kenworthy recalled his fingers trembling as he sent the news to his Twitter followers.

"I was so scared," he said. "As soon as I posted it I had likes coming back. I had guys on my own team calling me, guys who called me 'faggot' were calling and apologizing. A world had lifted.

"I was ready for the worst-case scenario. I saw the opposite impact right away."

For one thing, his skiing improved with one less secret on his mind.

"I don't know if it was because I was in the closet but it was ever-present in my mind and it took me out of my moment," Kenworthy said. "My abilities hadn't changed. And I was able to ski better."

And the sponsors he feared might shun him instead embraced him.

"Products are looking for diversity. If I had known that it would have given me so much hope and saved me so much heartache," Kenworthy said. "I'm more marketable now that I'm out there. I'm glad they are embracing diversity."

That's not to say his revelation was without haters and social media trolls.

"There was hate for sure and scorn online," Kenworthy said. "I still get messages every day."

Rippon, twice a world junior champion, said on Twitter that being a gay athlete "is exactly like being a straight athlete. Lots of hard work, but usually done with better eyebrows".

I was recently asked in an interview what its like to be a gay athlete in sports. I said that it’s exactly like being a straight athlete. Lots of hard work but usually done with better eye brows.