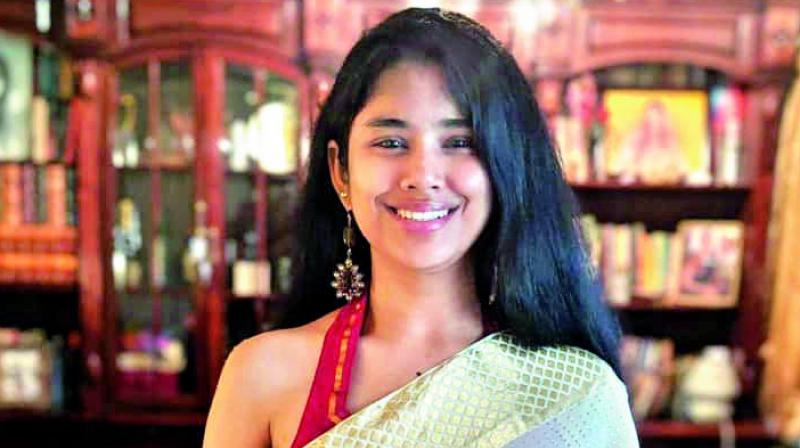 Over the past week, the Telugu-speaking states have been abuzz with the name of Sanchaita Gajapati Raju. She became the first woman chairperson and hereditary trustee of the Simachalam Devasthanam in Visakhapatnam, and the Maharaja Alak Narayana Society of Arts and Science (MANSAS) Trust established by her grandfather P V G Raju.

“I am super excited,” Sanchaita says. “To provide good governance and remove gender discrimination will be my immediate priority.”

As the eldest surviving daughter of the late Ananda Gajapathi Raju and Uma, and the niece of former Union minister Ashok Gajapathi Raju, Sanchaita hails from an illustrious family. But her journey has been far from easy.

In becoming the chairperson of the Devasthanam, she ousted her uncle Ashok Gajapathi Raju from the post. He had held the office after the demise of Sanchaita’s father in 2016. The latter has now kicked up a storm, alleging that Sanchaita’s appointment was “political vendetta by Andhra Pradesh chief minister Y S Jagan Mohan Reddy.”

But Sanchaita is unfazed. “People think I came from nowhere. But I have been fighting this case for a long time,” she says. “Several months back, I submitted a legal representation to the state government of Andhra Pradesh with complete documentation that supports my identity. And I am thankful to the chief minister for finally initiating the action.”

Sanchaita alleges that her extended family distorted facts, misrepresented her and painted an untrue picture. (Sanchaita’s father had remarried after separating from Uma). Apart from a malicious campaign (that she is a Christian), Ashok Gajapathi Raju claims that only a male heir can head the Trust.

He says he will challenge Sanchaita’s nomination in court.

But Sanchaita says, “I give a damn! I’m not one to take things lying down. I will make my work do the talking.”

Asserting that “I am a lawyer and I know my rights, and will stand up for my rights”, she asks “Can’t a woman head a temple trust?”

She says she gained strength from her mother, and was inspired by her grandfather’s work.

Born in Hyderabad and raised in Delhi, Sanchaita studied political science at Delhi University before qualifying as a lawyer. Coming from a family of politicians, Sanchaita was naturally inclined towards politics.

“But I always wanted to be in a public space. After practising as a lawyer briefly in Delhi, I decided to float my own NGO, Social Awareness Newer Alternatives (SANA) in 2011,” she says, and adds that she also won the inaugural Google Global Impact Challenge for her vision of bringing clean drinking water and sanitation to villages in coastal Andhra Pradesh.

“I utilised the Rs 3 crore prize money I won for my NGO work. And since then I have not looked back and have been working relentlessly,” she smiles.

In April 2015 Sanchaita was invited to address the Women in the World Summit, hosted by The New York Times at the Lincoln Center in New York. She was also invited by UNESCO to address the conference on Sustainable Development Goals in Paris in September 2016.

But it was her decision in October 2018 to join the BJP that came as a surprise. She explains that she got into politics since she wanted to get into the development sector.

“I was inspired by Prime Minister Narendra Modi’s ideologies. But to drive major social change we need muscle,” she says.

“I am proud of my legacy, but it should not be my identity.”

Ask about her single status, Sanchaita quips, “I am happily unmarried; I just go where life takes me.”

While her daily routine includes yoga and workouts, Sanchaita loves catching up with friends and gardening.

“I am a foodie and urban farming is a stress-buster,” she says, and adds that she is collaborating with Cornell University for a project on urban farming.

Interestingly, Narendra Modi follows her on Twitter. “When I was in Canada in September 2019, I got the message that Modiji is following me. I just couldn’t believe it. After seeing the verified symbol (blue tick) I was ecstatic and felt humbled,” she signs off.