Farhad Nouri's works were on display on Wednesday in what was also his charity event to raise money for a Serbian boy. 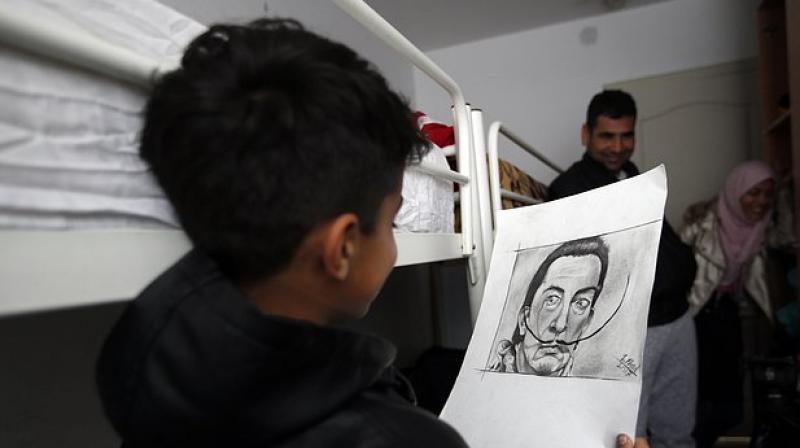 Among Nouri's works exhibited in the garden of a Belgrade cafe were his drawings of Pablo Picasso, Salvador Dali and Harry Potter. (Photo: AP)

Belgrade (Serbia): A 10-year-old migrant from Afghanistan, who has been nicknamed "Little Picasso," is using his first ever exhibition to help another boy in need.

Farhad Nouri's drawings and photographs were put on display on Wednesday in what was also his charity event to raise money for a Serbian boy recovering from brain tumour surgery.

"Thank you all for coming here!" Nouri told dozens of visitors as he opened the exhibition organised with the help of aid groups and supported by Serbia's government.

Among Nouri's works exhibited in the garden of a Belgrade cafe were his drawings of Pablo Picasso, Salvador Dali and Harry Potter.

Nouri's photographs mostly include scenes from Belgrade, where the boy and his family have been living for the past eight months in a crowded migrant camp.

"I am very happy and excited," he said. "This is the first time something like this is happening to me."

The family is among several thousand migrants who have been stranded in Serbia after fleeing war and poverty in their homelands. They have been unable to move on toward the European Union, which has sought to curb the influx of migrants.

Ivan Miskovic, from the Serbian government's refugee agency, said at the opening of Nouri's exhibition that children account for about 40 percent of 4,500 migrants currently in Serbia.

"They are the most vulnerable among the migrant population," Miskovic said. Nouri and his family left their home in Afghanistan two years ago. Upon his arrival in Serbia, Nouri joined art classes organized by aid groups and his talent soon became a sensation, turning him into a local celebrity. "His talent is truly exceptional," Miskovic said.

Anita Milev, from the Refugee Foundation group, said the exhibition was meant "to show the retrospective of what he (Nouri) has achieved during the classes."

Milev explained that the charity money for the sick Serbian boy is being raised through donations and by selling Nouri's photographs and copies of his drawings.

Nouri, who is dreaming of one day moving to Switzerland to become a painter and a photographer, said he wanted to help someone else as well to show how important it is to be good to other people.

Wearing a straw hat and sunglasses on a hot summer afternoon, Nouri carried out an old guitar that served as a box for donations for the sick Serbian boy. "We all need kindness," he said.