Recipient of Padma Shri & Padma Bhushan, he was one of the most important literary minds of the present. 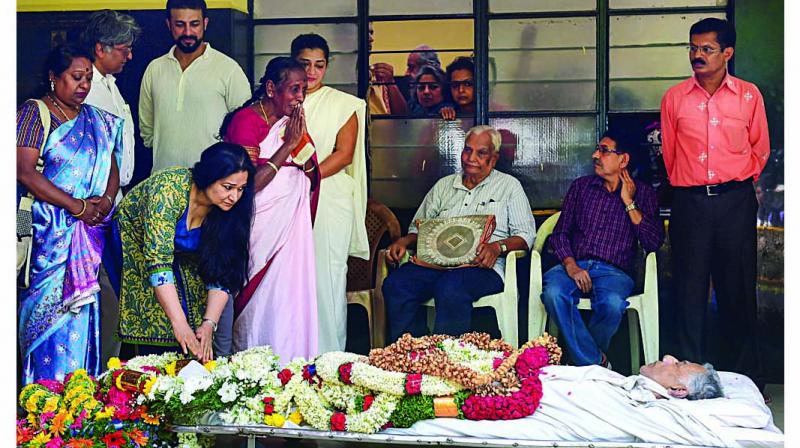 People pay their last respect to the mortal remains of the noted actor, filmmaker and playwright Girish Karnad before his last rites in Bengaluru on Monday. (Photo: PTI)

It was as much this side of his personality as his legendary plays that made Girish Karnad such an outstanding figure, who strode the worlds of theatre and movies for over five decades with equal ease, earning accolades even as an actor.

The loss of the Jnanapith awardee, who passed away at his home in the city Monday morning at 81, is therefore mourned by people across generations and literary tastes.

Survived by his wife, Dr. Saraswati Karnad and his two children, the Rhodes scholar had suffered from a prolonged illness related to his lungs that required him to  wear a mobile oxygen concentrator during the last few years.

He was seen wearing the life support equipment even in the Salman Khan starrer, Tiger Zinda Hai, where he played the role of a fictitious Research and Analysis Wing (R&AW) chief. His last rites were conducted as he had wished, without the trappings of a state funeral or religious ceremonies.

Declaring a holiday on Monday as a mark of respect to Karnad, the chief minister’s office in a statement also announced a three-day state mourning.

His mortal remains were taken to the Kallahalli crematorium in Byappanahalli where the last rites were performed in the presence of family members, the celebrities from the Hindi film industry, theatre, politics and literary scholars.

“He was suffering from an illness for some time and passed away in the morning due to it. He had made it clear there was to be no state funeral or religious ceremonies after his passing. Although we did receive a call from the state government’s office offering to hold a state funeral, we decided on a simple affair without any form of ostentation or rituals as he would have wished,” said his son, Raghu Karnad.

However, determind to honour the seven-time Jnanapith awardee, the state government declared Monday a holiday and announced a three day state mourning as a mark of respect for him. While he may have passed on, his contribution to the world of literature will remain as his plays were both critically acclaimed and popular. From Yayati, the first play he wrote, to his last, Rakshasa Tangadi,  based on the last years of the Vijayanagara empire, he both entertained and evoked awe for the quality of his literary style. His plays like Tughlag, Hayavadana, Naga-Mandala, Taledanda and many others are recognised as one of the main pillars of the Navya literary movement. While numerous works brought him fame, he found time for acting and screenwriting too, making his debut in Samskara, based on a book by legendary Kannada writer U.R. Ananthamurthy. The film won the National award for best feature film. Karnad’s directorial debut, Vamsha Vriksha, was co-directed by another giant, B. V. Karanth. Coincidentally, it also marked the debut of one of Kannada film industry’s legendary actors, Dr. Vishnuvardhan. While remaining a prominent face of parallel cinema,  Karnad was  also popular in commercial mainstream films across various languages.

In Tamil films, his most popular role was that of  a Governor in Kadhalan starring the dancing sensation, Prabhudeva and actress, Nagma. He also worked with Tamil superstars, Rajinikanth and  Kamal Hassan besides several prominent actors. His last appearance was in Salman Khan’s Tiger Zinda Hai. Those familiar with the late 80s popular TV series Malgudi Days directed by Shankar Nag, will remember him for his role as the father of the little boy, Swami, who is central to the plot.