Breed has pledged to address the city's most pressing problems, including homeless tent camps and open drug use. 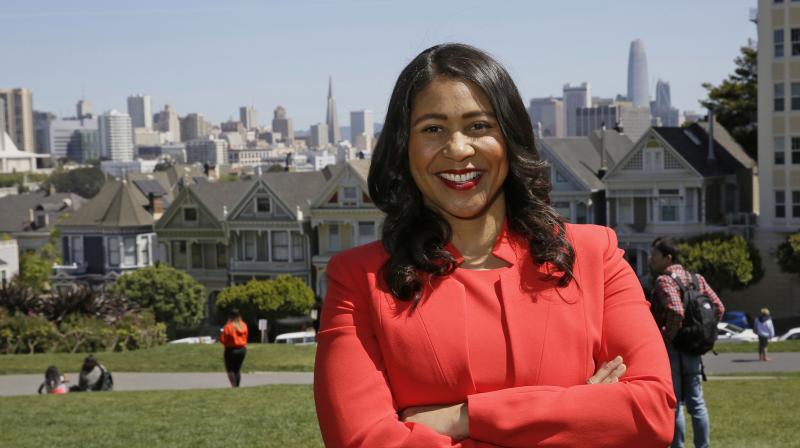 In this file photo taken April 13, 2018, then San Francisco mayoral candidate and Board of Supervisors President London Breed poses for a photo at Alamo Square in San Francisco.(Photo: AP)

SAN FRANCISCO:  London Breed will make history Wednesday as the first black female mayor of San Francisco when she is sworn into office in the city that has come to embody extreme wealth and poverty in the modern age.

She will take the oath outdoors on the steps of City Hall in a public ceremony before at least 1,000 spectators. Afterward, she will meet well-wishers in her new office - an open house tradition that dates back a century. The 43-year-old Breed succeeds Mayor Ed Lee, whose unexpected death in December prompted a special June election to serve the remainder of his term.

Breed, a San Francisco native, has pledged to address the city's most pressing problems, including homeless tent camps, open drug use and unbearably high housing prices. She also says she is committed to ensuring that impoverished African American and other minority children receive the opportunities they need to advance.

Breed grew up in public housing and frequently talks about the tough love and support she had growing up, especially from her grandmother who raised her.

She also learned from mentors and neighbors who early on spotted potential and encouraged her to study hard. Now she will earn an annual salary of $335,996.
Breed was most recently president of the San Francisco Board of Supervisors for more than three years,

On Tuesday, colleagues toasted her and outgoing Supervisor Jeff Sheehy at their final meeting. Breed thanked her colleagues for their dedication and promised to work with them no matter their disagreements.

"You can't please everyone. Not everyone is going to like you, not everyone is going to do what you want them to do," she said. "And what I noticed about this board, and what made me so proud to be a part of it is, we stand our ground, we do what we think is best and we try to fight for the people we represent."

Breed is a Democrat, as is just about everybody else in public office in San Francisco. She is considered part of the more business-friendly faction of the party. San Francisco, with a population of 870,000, is about 6 percent black - one of the smallest percentages among major U.S. cities - and those numbers are dwindling.

The Rev. Amos C. Brown, president of the San Francisco branch of the NAACP, said Breed has the character, compassion and courage to lead the city. Her inauguration, he said, will show "a quintessential picture of how America can become a more perfect union."

Breed is the second woman to be elected mayor of San Francisco. The other was current U.S. Sen. Dianne Feinstein. The tradition of an inauguration day reception queue started in 1916 with Mayor James "Sunny Jim" Rolph Jr. inside a newly completed City Hall, said Bill Barnes, spokesman for the city administrator's office. The old building had been destroyed in the 1906 earthquake and fire.