She was responding to an ongoing debate in the Supreme Court over the Ram Janmbhoomi temple issue. 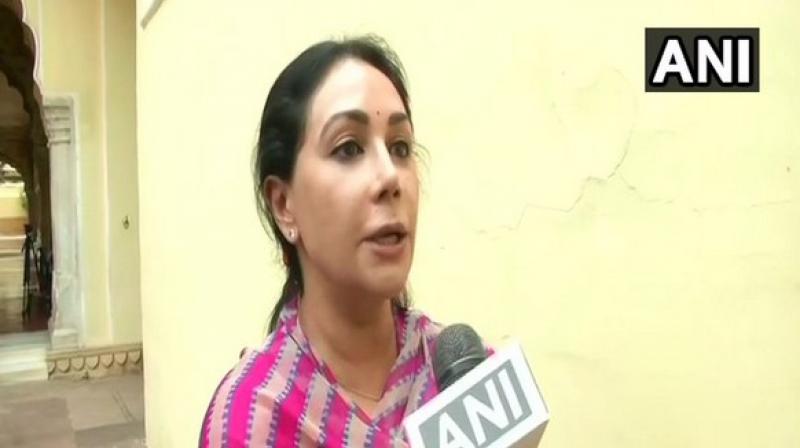 "I have been listening to it from childhood in our household. Also if you search about the Kachwaha clan online, it traces our lineage back to Kush," she said. (Photo: ANI)

Jaipur: BJP MP and member of Jaipur royal family Diya Kumari, on Sunday, reiterated her claims to be a descendant of Lord Ram, which is a matter of pride for all those who share this lineage.

"When the Supreme Court questioned whether there is any descendant of Lord Ram in the world or not, then I replied that we (Jaipur royal family) are descendants of Lord Ram's son Kush. I also said that just like us, there are many more people in the world who come from his lineage. It is a matter of pride that we are descended from him," Diya told reporters here.

She was responding to an ongoing debate in the Supreme Court over the Ram Janmbhoomi temple issue, in which the Bench had apparently asked whether there were any descendants of Lord Ram in the world.

On being asked about proofs to back up her claims, the BJP MP said that her family had documents from the ancient times, which traced their lineage back to Lord Ram and his direct descendants.

"I have been listening to it from childhood in our household. Also if you search about the Kachwaha clan online, it traces our lineage back to Kush," she said.

"We have documents, manuscripts and the genealogical tree in our library and museums too on whose basis we claim our descent from Lord Ram's family, and we are not unique in this. The Rathores claim they are the descendants of Kush's brother Luv," Diya said.

She, however, clarified that her statements were not made with an attempt to interfere in the proceedings of the apex court but she was ready to provide them with the documents if the need arises.

"I do not want to interfere in the proceedings of the court but if they demand these documents from us, we will definitely provide all of them. There are many of his descendants, and the whole of India should be proud of it," Diya said.

According to the genealogical document provided by her family, King Dashrath appears on the 62nd number in the family tree, while Lord Ram and Kush appear on the 63rd and 64th number respectively.

Sawai Jai Singh, Madho Singh and other rulers of the Jaipur royal family too appear on the documents provided by them.