Meet the Padma Bhushan awardee couple from the Vodafone ad

Dancing on a boat, was a challenge even for the professional dancers, but every moment of the shoot was enjoyable for them. 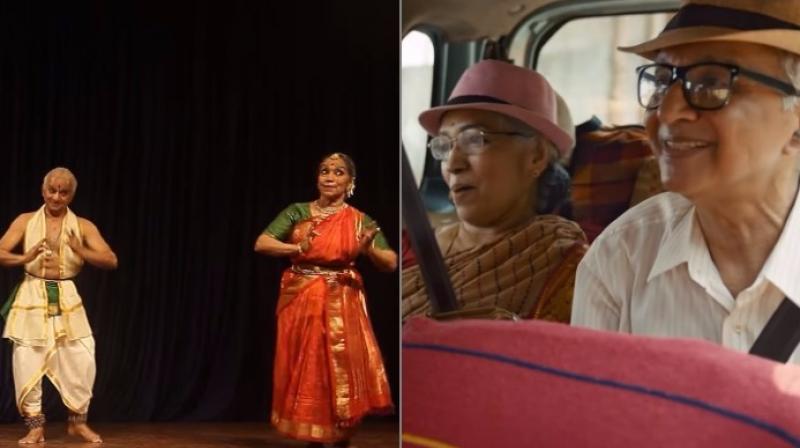 Chennai: Several people appearing in advertisements are being discussed a lot all over social media. After the Airtel 4G girl became one of the most popular faces for the telecom giant, Vodafone seems to have brought the coolest granny and grandpa on board as brand ambassadors for the Vodafone 4G campaign.

While the internet has been admiring this couple doing everything from going parasailing and getting tattoos to shaking a leg in Goa, this duo in their 70s are Bharatnatyam Dancers from Chennai who have both been honoured with the Padma Bhushan award. Shanta Dhananjayan and V.P Dhananjayan also teach dance and run a business in Chennai together.

Although the couple’s son Sanjay work’s for Ogilvy in New York, he didn’t know that they were being approached for the campaign. Shanta and Dhananjayan found the idea interesting as they found it different from usual ads and more like characters they were enacting.

Shanta actually went for parasailing and evidently aced it in a saree, but for Dhananjayan things were a bit tricky as both of them were on the move since their arrival in Goa and it was difficult for him to wear a shirt and shorts because he is used to wearing traditional veshti and jippa.

As for dancing on a boat, it was different and a challenge for the professional dancers, but every moment of the shoot was enjoyable for them. The reaction to the ads has been tremendous as the couple got mails and calls saying how cute and natural they looked.

Dhananjayan has previously appeared in a Malayalam commercial for Nerolac Paints and Shanta did an ad for Kumaran Silks. The Padma Bhushan awardees say that acting comes naturally as it’s a part of Bharatnatyam and they breath the art-form.