Several attempts for a successful rescue had failed and resulted in more people stranded. 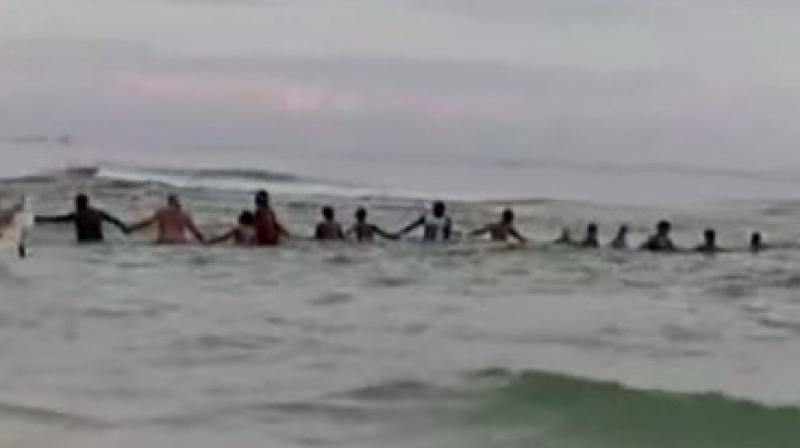 On the evening of July 8, beachgoers at Panama City Beach, Florida (US), were startled to hear the screams of people crying desperately for help. A six-member family and four other swimmers had been swept away by a powerful riptide, the Washington Post reported.

Several attempts for a successful rescue had failed and resulted in more people stranded. Because there was no lifeguard on duty, police opted to wait for a rescue boat. Roberta Ursrey was among the people caught in the riptide fighting for their lives for nearly 20 minutes, the report revealed.

Jessica and Derek Simmons who were at the beach that day couldn't sit by and do nothing. "These people are not drowning today," Jessica told the Panama City News Herald. "It's not happening. We're going to get them out."

It was at that point people started shouting, "Form a human chain!"

When people on the shore started getting in line, it grew from five to nearly 80 people. Some people didn't even know how to swim.

Confident in her strong swimming abilities, Jessica decided to go up to the end of the chain, where she started passing one person at a time along the human chain safely to the beach.

When Jessica made her way to Roberta, her head was barely above the water. Making a bad situation worse, Ursrey's mother, Barbara Franz, who was still in the water, was suffering a heart attack. "That's when the chain got the biggest," Ursrey is quoted as saying by the Washington Post. "They linked up wrists, legs, arms. If they were there, they were helping."

Thanks to the bravery of many people all 10 stranded swimmers made it safely back to land. "It was beachgoers and the grace of God's will," Washington Post quoted Ursrey as saying. The life-changing incident has given the Ursreys family a newfound respect for water.