Aditi became the first Indian to lead the field going into the final round of the championship. 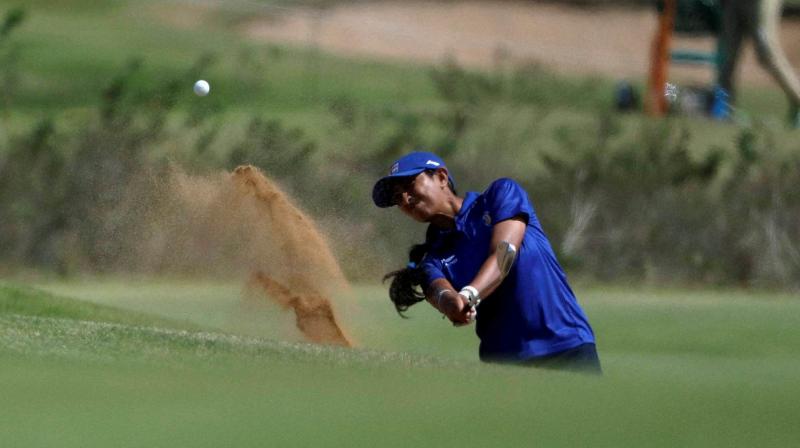 Spain's Belen Mozo, Denmark's Emily Pedersen and Austrian Christine Wolf are tied for the second position with identical scores of 143 after the second round. (Photo: PTI)

Gurgaon: Golfing sensation Aditi Ashok carded 3 under 69 on the second day to grab the sole lead in the Hero Women's Indian Open at the DLF Golf and Country Club in Gurgaon on Saturday.

In the process, she became the first Indian to lead the field going into the final round of the championship.

Defending champion Emily Pedersen, Christine Wolf and Belen Mozo are tied for the second position with identical totals of 143, two behind Aditi.

The $400,000 event will culminate on Sunday and the home crowd will be rooting for Aditi to become the first Indian to win a Ladies European Tour event.

Aditi, who started her day in tied ninth position, had an indifferent front nine.

She carded a birdie on the 2nd hole. However, a dropped shot on the 6th and miss-hit into the water on the 9th, which resulted in a double bogey, added to her woes.

But the 18-year-old rookie was unfazed by the initial setbacks and fired five birdies in her back nine to finish with a total score of 141 after the second round.

She was tied for the second position after the 17th hole, still needing a birdie on the final hole to take the lead.

The youngster showed great composure and produced a brilliant approach shot which landed 3 feet from the pin, which she holed comfortably, much to the joy of a cheering crowd.

Summing up her day, she said, "I think I had a really sharp back nine. I hit all nine greens, so had nine good chances of a birdie and I made 5 of them. So it was very good. It could have been better in the front nine but I had a double bogey on the 9th hole but apart from that it was good."

When asked about her approach on the final day, she said "I think I am going to play the way I played the first two days, try and create as many chances as I can and keep myself in play off the tee and while hitting my approaches and it should be good."

Spain's Belen Mozo, Denmark's Emily Pedersen and Austrian Christine Wolf are tied for the second position with identical scores of 143 after the second round.

Apart from Aditi, four other Indian golfers Vani Kapoor, Gaurika Bishnoi, Amandeep Drall and Diksha Dagar made the cut. Vani played another cautious round with a score of 2 over 74 to take her total to 147 after 36 holes. She is placed tied 13th and will be eager for a top ten finish.

Belen's campaign of 2 under 70 included birdies on the 4, 11th and 17th holes along with a bogey on the 14th. Overnight leader Christine Wolf carded 1 over 73 with two birdies and three bogeys to stay in the title race. Defending champion Emily Pedersen appeared to be struggling at 4 over after 14 holes, but the Dane produced the goods on the final four holes to stay in contention for her second title at Hero Women's Indian Open.