Shinkansen bullet train is being introduced in India on the Mumbai-Ahmedabad stretch in 2018 and the service will be operational from 2023. 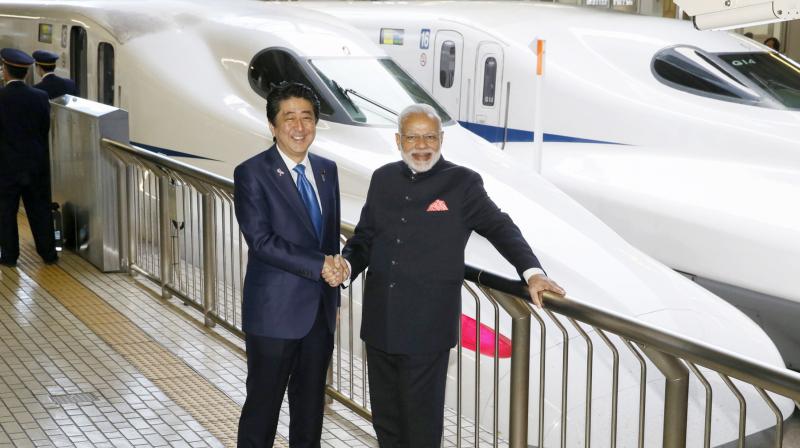 Tokyo: Prime Minister Narendra Modi along with his Japanese counterpart Shinzo Abe on Saturday travelled in Japan's famed high-speed Shinkansen bullet train, which is being introduced in India on the Mumbai-Ahmedabad stretch.

Modi and Abe travelled in the train, whose speed ranges from 240 kms per hour to 320 kms per hour, from Tokyo to Kobe, a city on Osaka Bay in Japan.

"On the way to Kobe with PM @AbeShinzo. We are on board the Shinkansen bullet train," Prime Minister Modi tweeted along with pictures of him in deep conversation with Abe.

The construction of the high-speed train corridor between Mumbai and Ahmedabad will start in 2018 and the train service will be operational from 2023.

Abe, at a joint press conference with Prime Minister Modi in Tokyo on Friday, had said that the designing of the project will begin by the end of this year.

He said the ambitious project "symbolises a new dimension in the special relations" between the two countries and hoped that introduction of the rapid train network will spur further economic growth in India.

The high speed rail system 'Shinkansen' was introduced in Japan in 1964.